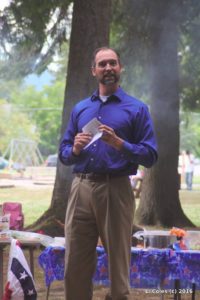 This week, ALEC and FreedomWorks introduce Idaho State Representative Sage Dixon.  Representative Dixon moved his family to Idaho over a decade ago looking for a more independent and less regulated lifestyle. He settled into a home on a property that he shares with a variety of livestock, gardens, fruit trees, and is surrounded by beautiful views and gracious neighbors. Rep. Dixon is a superintendent for an electrical contracting firm in CDA. Prior to this position he owned a small business for over eight years, operating out of Sandpoint and working in most of Bonner and Boundary Counties. In 2011, he was selected by The Bonner County Commissioners to be on the Property Rights Council, where he served as vice-chair. He was also the President of The Friends of Idaho, an NGO whose mission is to protect the Constitutional rights of Idaho and its citizens.  His experience both politically and professionally has given him the opportunity to meet a wide variety of people from all over his district.

I ran for office because I thought our district was not being accurately represented, also, more importantly, I was asked by a number of constituents to enter the race.

In your view, what is the biggest issue facing Idaho?

The biggest issue facing Idaho today is the potential expansion of Medicaid in our State.  Enough signatures were gathered to put expansion on the November ballot and, regardless of how we try to control it through legislation, will result in all the same negatives that other states have experienced.

If you could “wave your magic wand,” what would you like to see immediately implemented in Idaho?

With my “magic wand,” I would more clearly delineate the Executive branch from the Legislative branch in Idaho, and with the advent of a new Governor next year we have the opportunity to do just that. Secondarily, I would enact “freedom of expression” legislation to protect individuals and businesses who do not wish to participate in events that go against the tenets of their faith.

I serve on the Appropriations, Business, and Transportation Committees.  All my Committee appointments were made by the Speaker of the House with some input from me. I also serve on two interim committees: The Public School Funding Formula Committee and The Campaign Finance Reform Committee. I have been told my thoughtful, reasoned, and conservative approach to legislation aids in deliberations and in crafting good legislation.

I am most proud of the work I have done to fight human trafficking in Idaho.  I am also proud of getting a bill that allowed the Bible to be used in public school through the House, although the Governor later vetoed it.

The relationships I have built with other legislators and public policy experts, the model legislation that comes out of the task forces and the panel discussions on relevant topics have all been a great benefit to me.

What is your favorite thing about living in Idaho?

My favorite part of Idaho is the landscape: the rivers, lakes, mountains and farmland. I also love the resilient and independent spirit of the people.