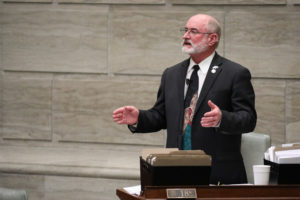 This week, ALEC and FreedomWorks introduce Missouri State Senator Brian Munzlinger. Senator Munzlinger is a third generation Missouri farmer and earned his Bachelor’s degree in Agriculture from the University of Missouri-Columbia. He is a member of the Missouri Farm Bureau, Missouri Corn Growers, Missouri Soybean, and several other associations. Senator Munzlinger is part of the Energy, Environment, and Agriculture Taskforce at ALEC. He also serves on the advisory board to the University of Missouri’s Greenley Research Center and the board of directors for the NEMO Grain Processors Co-op. Senator Munzlinger and his wife Michele have two children and are members of the Monticello United Methodist Church.

I decided to run for office back in 2002 because I wanted to ensure that the voices and concerns of rural Missouri and agriculture continue to be heard. The interests of my constituents are important for Missouri, and I felt it was my responsibility to personally advocate for them.

The biggest issue facing the state of Missouri right now is job growth and development. As legislators, we need to focus our energy and resources in expanding jobs for people with trade skills as well as four year degrees. These individuals make up a considerable portion of our population and are the reason many of our other industries are still functioning efficiently; an ample amount of jobs in this sector would positively impact the entire state.

If you could “wave your magic wand” what would you like to see immediately implemented in your state?

I would very much like to see a value added program implemented statewide to support taking Missouri products another step or two down the value chain. This would not only add value to Missouri products, but it would also help create the jobs that our state needs.

You might think it would be an agricultural or second amendment bill, but the oral chemotherapy bill that increased the affordability and accessibility of medication is the one I consider to be the most important. We all know someone who has battled or is currently battling cancer, and no one should have to break the bank in order to get the help they need.

ALEC has helped me by providing a good sounding board for legislative ideas as well as a place to follow what is happening in other states around the country.

While I was in college at the University of Missouri, I loved to rodeo, and I continued to do it for a few years after I graduated. I was also a shooting instructor for 4H and took teams to national competition.