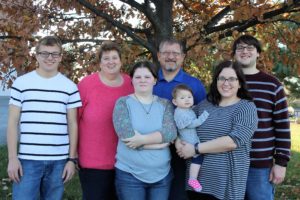 This Week, ALEC and FreedomWorks introduce Nebraska Senator Laura Ebke. Senator Ebke was elected to the Nebraska Legislature, representing LD 32, in November of 2014. She has spent most of her life in the area making up the 32nd Legislative District. Raised in Fairbury with her parents (her father served as Mayor of Fairbury for a time and her mother on the Fairbury School Board) and grandparents (one of her grandfathers served as Mayor of Fairbury and the other grandfather served on the City Council), she developed a true appreciation of getting involved politically. Laura was awarded her PhD in Political Science, and taught part time at several colleges before being elected to the legislature. She married her high school sweetheart, Russ Ebke, and for the last 34 years have raised their family together.

My family has a long history of elective public service—from mayor to school board. I served on my own local school board for 12 years, but because of term limits in the Legislature had some people approach me about running for an open seat in 2014. My agenda has always been one of trying to expand opportunities in Nebraska, while reducing the footprint of government.

What is your favorite thing about Nebraska?

The people. I grew up here, and we chose to return here after college. Most Nebraskans are kind and an independent lot who see others as their neighbors. People still pull over on the side of the road to help if it looks like you need some assistance.

In your view, what is the biggest issue facing Nebraska?

Like so many other places, Nebraska is finding itself being weighed down by growing government services and mandates, and an ever increasing tax burden. Add that to the depopulation of our rural areas, and Nebraska faces real challenges of demographics and funding in the coming years.

If you could “wave your magic wand,” what would you like to see immediately implemented in Nebraska?

I’d like to see an immediate reduction in regulations of all sorts—if I could wave my magic wand. I believe that the illusion that government can keep us safe from “bad actors” in terms of occupational licensing, or “bad procedures” in the way of inspection—tends to stifle small businesses and the job growth that they create. We all benefit when businesses can thrive—the state shouldn’t be making it tougher for them to do so.

I serve as the chair of the Judiciary Committee, and also serve on the Education Committee. As Judiciary Chair, I’ve helped to bring those of different political views together as we try and address our broken criminal justice system—a system which has seen incarceration continue to grow. On the Education Committee, I bring the voice of a former school board member of a rural school district that has seen significant growth in the last 15 years, in large part due to a growing immigrant population.

This year, we passed LB299—the Occupational Board Review Act—which improves the oversight functions of the Legislature with respect to our various occupational licensing boards, and encourages the legislature to consider less restrictive means of regulation.

Nebraska’s legislature has a tradition where member provide cookies or cupcakes or other goodies on the floor in celebration of their birthdays or some other event, and the presiding officer announces the reason why treats are on your desk. When my first grandchild was born on March 16 of 2017, I bought pink frosted donuts to the floor, and had her name, weight, etc. read into record. One of the fun perks of being a legislator is getting your granddaughter’s birth made part of the official transcript!