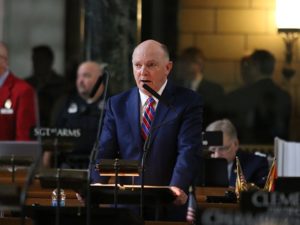 This week, ALEC and FreedomWorks introduce Nebraska State Senator Jim Smith. Senator Smith was elected in 2010 to represent the 14th Nebraska legislative district. He is the chairman of the Revenue Committee and is Vice Chair of the Transportation and Telecommunications Committee. Senator Smith is on the board of directors at ALEC. He is originally from Pensacola, Florida and attended The University of West Florida where he earned his degree in accounting. He then attended Creighton University where he earned his MBA.  He is a manager in the Omaha Public Power District and owner of Norm’s Door Service. He resides in Papillion Nebraska with his wife Ruth and their two children.

I have always been very active in my community, serving on a number of boards and advisory councils.  Several local and state leaders encouraged me to run when the District 14 seat came open.  As an owner of a small business, I realized serving in the Legislature would give me the opportunity to advocate for policies that promote the development of business without extensive government regulation.

In your view, what is the biggest issue facing Nebraska?

Nebraskans approved an amendment to our state Constitution in 2000, limiting senators to two four-year terms.  I believe its full impact has finally come to fruition. We lack the knowledge, historical perspective, leadership, and respect for the institution that are necessary to bring differing factions together and move sound policy forward.  Given the makeup of our state, we are experiencing a strong urban/rural divide which has resulted in many proposals ending in a deadlock.

If you could “wave your magic wand,” what would you like to see immediately implemented in Nebraska?

I would like to see comprehensive tax reform immediately implemented in Nebraska.  Nebraska is experiencing astronomical increases in property valuations, particularly in rural areas, resulting in extremely high property taxes.  Our corporate and individual income tax rates are not competitive with those of surrounding states, making it difficult to grow our economy, increase our state revenues, and lower our reliance on property taxes to fund local government.

I currently serve on two legislative committees.  I am the chairman of the Revenue Committee and the vice-chairman of the Transportation and Telecommunications.  I made sure the hearing process was transparent and completely accessible to our second house, the public; that each person’s voice was heard and full and fair consideration was given to every issue.

While I have successfully passed several pieces of legislation in my eight years, two bills in particular come to mind – LB 1161 and LB 960.  LB 1161 (2012) provided for an expedited, alternative permitting process for transcontinental oil pipelines, such as the Keystone XL, which still ensures public input and protection for property owners.  In 2016, I worked closely with the administration to develop LB 960 – the Transportation Innovation Act.  This $450 million program has put Nebraska on schedule to complete our state’s expressway system, allows for a state/county bridge repair program, and provides for transportation projects aimed at stimulating economic development.

ALEC has connected me with legislative and business leaders from across the nation.  At ALEC conferences, discussing and analyzing different policy models with such a diverse group has been an invaluable resource in helping me develop and advance meaningful legislation that supports  a vibrant private sector, job creation, and individual freedoms.

I am an Admiral in the Great Navy of the State of Nebraska.