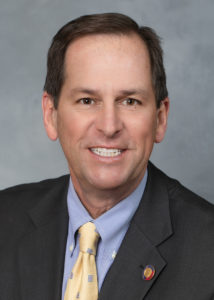 This Week, ALEC and FreedomWorks introduce North Carolina Representative Andy Dulin. Rep. Dulin was elected in 2016 to represent district 104 including South-Central Charlotte. He graduated from Appalachian State University and has called North Carolina home his entire life. He is the father of three sons and has been married to his Wife, Cathy, for 26 years.

I have a strong obligation to serve. I decided to run for office after several years on the Charlotte City Council.

In your view, how would you solve the biggest issue facing North Carolina?

In my view, to solve the biggest issues in North Carolina we must continue positive job creation in order to establish economic vitality for everyone.

If you could “wave your magic wand,” what would you like to see immediately implemented in North Carolina?

If I could “wave my magic wand,” I would like to see more democrats voting for republican values.

Do you serve on any committees, if so which committees and why?  How do you think you have impacted them?

I serve on multiple committees, the most being the Rules Committee.  I’m the only freshman on the rules committee and it has given me a quick look inside of how things are run.

ALEC has given me the opportunity to meet and exchange idea with folks from around the U.S. that I ordinarily would not meet.

What is your favorite thing about North Carolina?

It’s my home. My family settled in Charlotte in 1782. North Carolina is a welcoming state. We have grown because we make folks feel welcomed.

Can you share a fun fact about yourself that’s not in your bio?