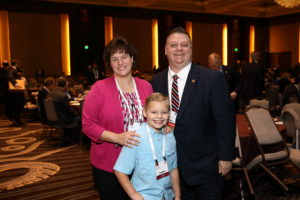 This week, ALEC and FreedomWorks introduce North Carolina Representative Jason Saine. Representative Saine is the 2018 ALEC National Chair and is part of the Tax and Fiscal Policy Task Force. He has been at the frontline of tax reform in North Carolina, leading to historic tax cuts. Jason continues to fight for further smart, conservative tax reform in his role as Senior Finance Co-Chair. He is also leading the way in North Carolina with innovation and investment in developing new technologies and investing in critical digital infrastructure. Rep. Saine has championed coding initiatives and grants in North Carolina, as well as programs that make technology accessible for low-income students. Born and raised in Lincoln County, Jason knows the opportunities and history of his county and North Carolina as well as anyone.

Why did you become a state representative?

I was appointed mid-way through my predecessor Rep. Jonathan Rhyne’s turn when he needed to step down. I had spent a lot of my 20s and 30s active in the conservative grassroots movement in North Carolina with organizations like Citizens for a Sound Economy and working on different campaigns. At the time the opening came up I wasn’t really looking to become an elected official, but was serving as the Lincoln County GOP Chair and after I talked it over with my wife and some close friends I felt I was the best fit for the job at the time. Six and a half years later, I’m glad I chose to throw my hat in the ring for that appointment. When I consider what we’ve done since I arrived in 2011 I’m pretty humbled to be part of it.

North Carolina is a state to look up to because of your historic tax cuts; in fact, it was just named as one of the top three states in the recent ALEC Tax Cut Roundup report. What is your advice to other state legislators looking to achieve tax cuts?

Several years ago a handful of states took up the challenge of tax reform at the state level, and were met with varying success. What set North Carolina apart was we got our spending under control and addressed our structural debt as we tackled tax reform as well. Effectively implemented tax cuts can help grow the state economy, which we’ve seen through weekly (and sometimes daily) announcements of companies relocating here or new companies starting up, which in turn bolsters revenue. We’ve seen surplus year after year while cutting taxes and keeping spending in line with the growth of our state economy, which has meant we’ve had enough saved to respond to hurricanes or other natural disasters.

What is next up on the docket for you and NC?

There are a lot of exciting technologies and innovative ideas being developed in the private sector. Last year we passed legislation on small cell technology, which will bring 5G internet to parts of North Carolina in a cost effective way. This year we’re going to continue to see how we can partner with innovators and ensure North Carolina continues to be a leader.

What do you look forward to as the incoming 2018 ALEC National Chair?

It’s been a great start to my term so far. What excites me most about this year is the chance to connect legislators from across the country with each other as we engage on significant issues. This is an incredible opportunity to see how changes at the federal level have not only been modeled after ALEC led innovations done at the state level, but now the chance to tweak state policy in response to federal legislation.

What is a fun fact that is not in your professional bio?

Before I came to the legislature I was serving as the Public Information Officer for our fire department and was certified as a Swift Water Rescue Technician.

To spend more time in the outdoors this year. I love to spend time with my family hiking and riding bikes on trails but we don’t take enough time to do it.