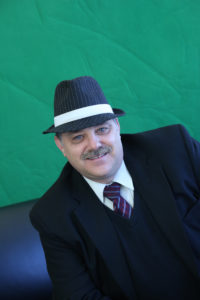 This week, ALEC and Freedomworks introduce South Dakota State Representative Michael Clark. Rep. Clark represents District 9 which includes Humboldt, Crooks, Hartford, Wall Lake, and a portion of North and West Sioux Falls. He was born in Denver, Colorado and raised in a rural community Northwest of Denver. Rep. Clark joined the Army after high school, where he dedicated 8 years of service to our country during the Gulf War in an artillery unit. After being honorably discharged, he drove trucks to see America and what makes this country and its people so great. In 1996, he arrived in Sioux Falls where he went to work for Gateway 2000, met his bride, and settled down. Their daughter is now grown and their son unfortunately passed away in April 2010. Along with being a Legislator, Rep. Clark also works in customer service for a telecommunications company.

At the end of the 2015 session one of our representatives, Steve Hickey, got the opportunity to fulfil a lifelong dream in Aberdeen, Scotland and resigned from his position. My name was submitted to the Governor to replace Mr. Hickey and although I made it to the final interview, Governor Daugaard selected Wayne Steinhauer to serve out the term. At the end of the 2016 session Representative Paula Hawks opted not to run for re-election and to instead run for Governor. Wayne Steinhauer opted to run for the seat he was fulfilling, leaving one open seat in the district. I waited to see who else might run, but many other candidates were either running for different office or had other commitments. It was like going to a ball game and there being no players on the field, everyone was on the sidelines waiting to see who would run out and pick up the ball.

The House of Representatives is supposed to represent the people, all the people. I looked at the professions of who was currently serving to find there were lawyers, medical professionals, farmers, business owners, and some retired folks. In Sioux Falls there are an abundance of call centers supporting many different businesses, there is even a call center supporting other call centers. There were important issues being discussed that directly and indirectly affected the people working in these call centers and I realized they had no voice in the legislature. There was an open seat that no one seemed interested in filling and a need for a group of people to be represented, it was my perfect storm. Since I was well versed in state politics, writing pieces for the South Dakota War College, I understood the process. I discussed the opportunity at length with my family, my pastor, and few close friends and once I made the decision to run, I was all in.

The biggest issue facing my state can be summed up in one word, hopelessness. Our college graduates are leaving the state to look for better futures in bigger cities. Our farmers are growing more than ever before, but being paid less per bushel. The Native American tribes have been abandoned by our federal government and left without means to be self-sufficient.  This hopelessness has led to an increase in drug trafficking and abuse, human trafficking, and an increase in other crimes.

There is no quick fix or silver bullet for the lack of hope, however there are things that can help.

The journey is just as important as the destination. We have a process, as imperfect as it may be, that does serve a purpose. All the discussions, collaboration, and debates help make sure we craft the very best legislation possible. We have very smart people serving in all levels of our state government; however, we are all smarter when we work together. To change that process would deny us the learning of how it all happens and the why things are the way they are.

Do you serve on any committees, if so which committees and why? How do you feel you have impacted them?

I currently serve on Health and Human Services and Transportation committees. One of the biggest things we have to be mindful of when crafting legislation is unintended consequences. This was the case of a bill designed to increase the age to purchase tobacco products from 18 to 21 years old. The bill would have negatively impacted those who work in convenience stores and in the electronic cigarette market. While I applaud what the end goal was, the means would have cost many their jobs and in some cases would have punished the retailers for doing the right thing. I worked aggressively to stop this bill from becoming law.

On the Transportation committee, one of the key components to helping our economy grow is to have strong infrastructure with a good transportation mix, including pipelines, rail, truck, water, and air. For far too long, rail service in the South Dakota has been neglected, which I wrote about in the article The Railroad and South Dakota. After I wrote the article, Senator John Thune became actively engaged in railroad and rail safety. In addition, South Dakota made some serious attempts to reestablish rail service in the state. Since elected, I have worked with Burlington Northern/Santa Fe, Genesee, and Wyoming to help bring rail back. There is still a lot to do, but I believe we are on the right track.

What project or law are you most proud of? How has ALEC helped you as a legislator?

Both of these questions can be answered at the same time. South Dakota House Bill 1073 and Senate Bill 198 are sister bills dealing with free speech on South Dakota college campuses. Shelby Emmett from ALEC was instrumental in helping bring together a team of free speech experts to discuss the issue. While the bills didn’t pass out of committee, the discussion about protecting free speech on our college campuses started and although it is not one I can mark in my win column, it is a win for our college students who want to express themselves in a true marketplace of ideas.