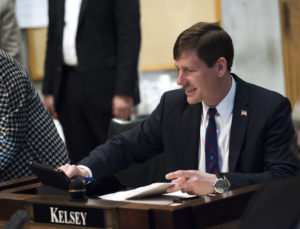 This Week, ALEC and FreedomWorks introduce Tennessee State Senator Brian Kelsey. Senator Kelsey represents District 31 including Cordova, East Memphis, and Germantown. He is chairman of the Senate Judiciary Committee, serves on the Senate Education Committee, and the Joint Fiscal Review Committee. He is currently serving in his 9th year as a state Senator. Prior to his election to the Senate, he served 5 years as a state representative. During his time in the House he was the Republican Floor Leader and Judiciary Civil Practice Subcommittee Chairman. Senator Kelsey is a civil litigation defense attorney and probate attorney with the Kelsey Firm. He was recently married in January.

My mom was a teacher for thirty years and she ensured that I received an excellent education. I ran for office to help Tennessee children receive the quality education they deserve.

In your view, what is the biggest issue facing Tennessee?

Tennessee needs a more educated workforce to fill all the jobs that are streaming into our state.

If you could “wave your magic wand,” what would you like to see immediately implemented in Tennessee?

If I could “wave a magic wand,” I would like to see more public support for school choice.

Do you serve on any committees? If so, which committees and why? How do you think you have impacted them?

I serve on the Senate Education Committee. I am proud that during the last five years, Tennessee students have been the fastest improving in the nation in math, reading, and science scores. I also serve as chairman of the Senate Judiciary Committee, which has passed some of the most extensive tort reform laws in the country.

I am the only legislator in Tennessee history to successfully pass two constitutional amendments: one forever prohibits a state income tax, and the other adopted a federal model for judicial selection.

Virtually every time I have sought guidance on a tort reform issue, the ALEC Civil Justice Task Force has already prepared model policy on the topic.

I have traveled to 35 foreign countries. I was recently married last January and I am looking forward to spending more time at home with my wife.