In a recent press release from the congressionally-appointed Financial Oversight & Management Board (FOMB) for Puerto Rico, the board announced that it filed its Plan of Adjustment to restructure $35 billion of debt accumulated through issuing General Obligation bonds and related debts, as well as $50 billion of public pension liabilities. The plan would also restructure $17.6 billion in sales tax supported bonds, $10.1 billion in bonds for the Electric Power Authority and $4.7 billion in bonds to the Government Development Bank.

However, the Plan of Adjustment is not a done deal. Because of a dispute over whether the plan meets statutory requirements, it is currently under litigation.

The chart below from The New York Times shows Puerto Rico’s public debt obligations along with the proposed reductions in liabilities: 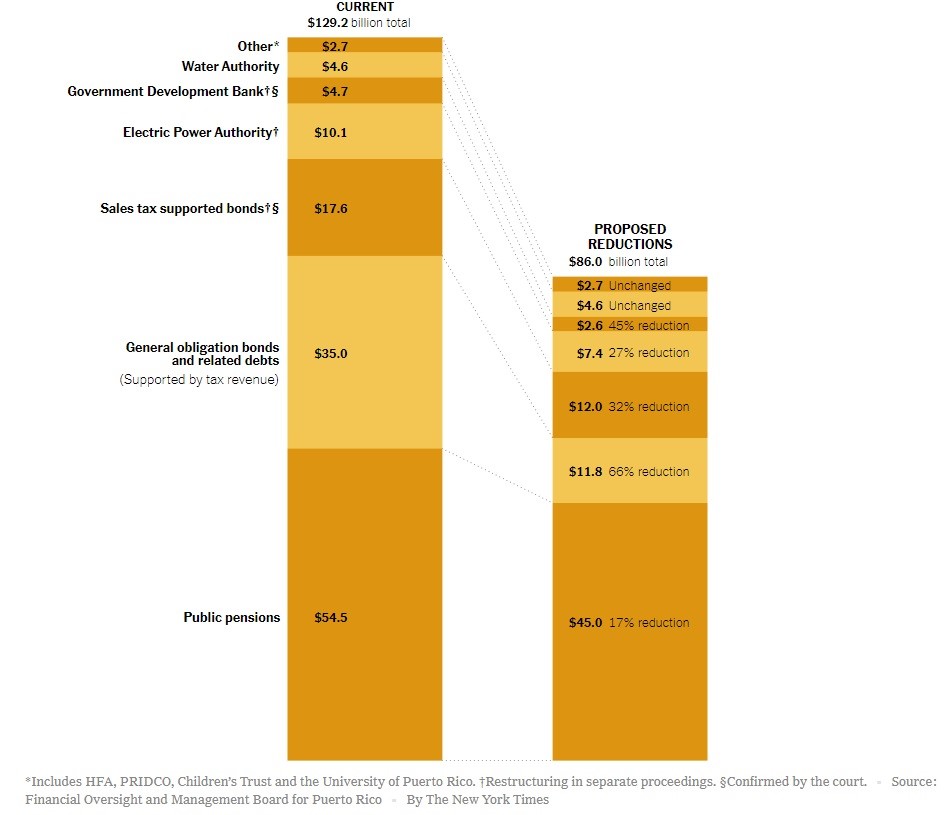 The ERS was a defined benefit, multi-employer pension plan that provided a set payout upon retirement based upon a retiree’s final average salary, years of service and a benefit multiplier (expressed as a percent) just like any other defined benefit plan. In 2008, the ERS issued pension obligation bonds in an attempt to stem the plan’s chronic underfunding — instead of making the necessary reforms.

Then, in 2013 the ERS was closed to new hires, who were instead added to a defined contribution style retirement plan. However, the ERS reform is a story of “too little, too late.” There were still massive unfunded liabilities that needed to be paid out to current retirees, as well as debt from the ERS pension bonds.

In August 2017, a year after Congress passed the Puerto Rico Oversight, Management, and Economic Stability Act (PROMESA) in 2016, all beneficiaries of the ERS were put into the defined contribution plan. This change was made by the Puerto Rico legislature at the urging of the ERS board in order to stop the growth of unfunded liabilities. Despite making the change to defined contribution, Puerto Rico still owed over $50 billion in pension liabilities and could not make the payments.

According to the Plan of Adjustment of Puerto Rico, any retiree (either in the ERS, the JRS, or the TRS) earning more than $1,200 per month could see an 8.5% reduction in benefit payments and a separate, independent pension reserve trust could be established to fund pension obligations for current retirees.

In addition, bondholders of ERS bond claims (about $3.1 billion of the $35 billion in “debt and other claims” being reduced) could see an 87% reduction in the value of bonds (note: the 87% figure is under dispute in the ongoing litigation). If approved, bondholders would only see these 13 cents on the dollar for their investment. These pension obligation bonds did not save the ERS from long-term unfunded liabilities and proved once again to be a risky investment for bond holders.

Like Puerto Rico, many states have massive unfunded pension liabilities. ALEC reports on pensions, other post-employment benefits (OPEB) and bonded liabilities find that states have liabilities in the trillions of dollars.

As recommended in the ALEC pension report Unaccountable and Unaffordable, it is important for states to fully fund pension promises and work to make retirement plans more sustainable.  The report also recommends states switch to a defined contribution model before a state goes over the fiscal cliff so that state governments cannot overpromise benefits and push the debt on future taxpayers.