Myth of the Day: Income Distribution is Increasingly Inequitable

One of the most prevalent claims, voiced particularly loudly by progressive groups, is that the United States has become a nation of have’s and have-not’s.  Progressives rely heavily on graphs like the one below to show that the top earners in America have enjoyed greater and greater wealth, while the lower and middle classes have been left behind.  In Tax Myths Debunked, Drs. Fruits and Pozdena take on this misconception directly. 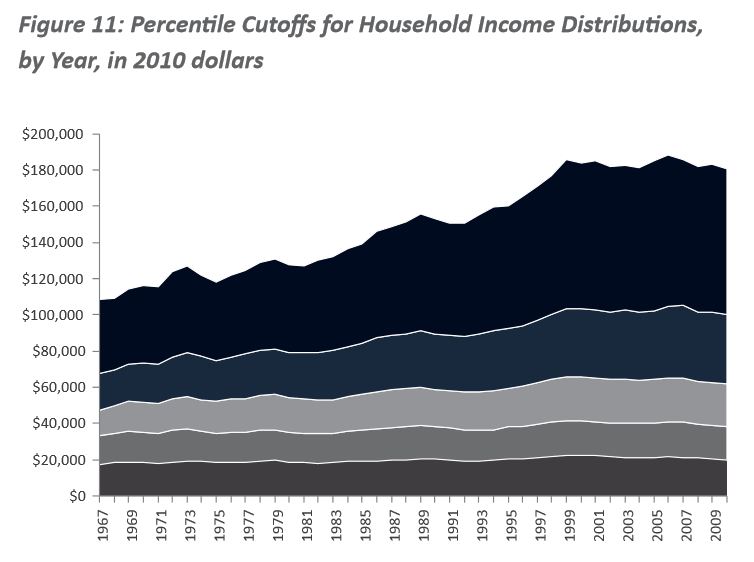 In this inflation-adjusted graph, it does seem clear that the highest 40 percent, or two highest quintiles, have grown both to a higher income and at a higher rate than the lower 60 percent, or three quintiles.  Some would see this as proof-positive that the rich are getting richer, while the poor are getting poorer.

Of course, that is not the whole story.  What the quintile graph above cannot tell, is who are in the different income brackets, how strong their purchasing power is, or for how long they stay in those brackets before moving up or down.  Drs. Fruits and Pozdena used U.S. Treasury data to track the movement of taxpayers across the brackets from one year to the next, known as income mobility. 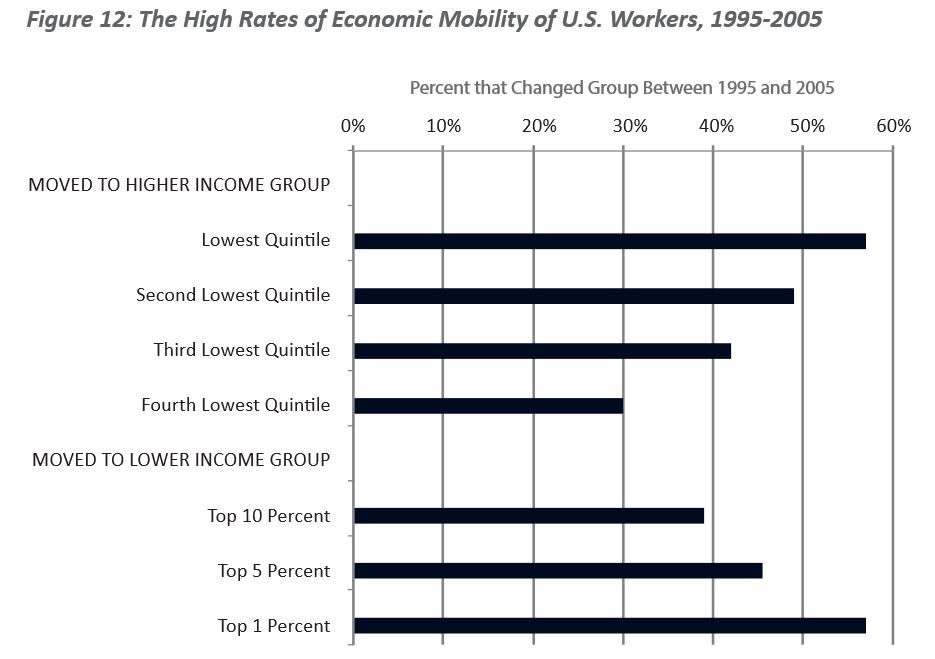 What they found was that an individual in the lowest quintile in 1996 had a 58 percent chance of moving up the income scale by 2005.  The chance of moving up quintiles diminishes as the earner’s starting place moves higher, but is still quite high.  Likewise, the chance of losing income, or falling down the brackets is equally high for top earners.  The top 1 percent of earners in 1995 had a 58 percent chance of falling to a lower category by 2005.  Just as there is bountiful opportunity to improve a low income in America, there is stiff competition and abundant opportunities to lose fortunes for the wealthy.

When progressive advocates talk about the stagnation of income in the United States, they sweep under the rug a fundamental fact about our economy: the American Dream.  Individuals in America enjoy robust economic opportunities and economic mobility is strong.  The American dream is an equality of opportunity, not necessarily an equality of income at every point in life.  Americans who are right now struggling with low income are not bound to their place.  They can know that opportunity in America is rewarded, and that they can make a better life for themselves.  That is a powerfully optimistic message.

To read more about the relationship between tax policy, stimulus spending, and their effects on an economy during a recession, check out Tax Myths Debunked. Co-authors Dr. Pozdena and Dr. Fruits use overwhelming evidence to confirm that the path to prosperity is in free-market, pro-growth policies. The report is available for free download at www.alec.org/tax-myths-debunked.