The Paris climate convention expected to take place later this year represents the culmination of more than 20 years of work by thousands of international delegates. Since the adoption of the United Nations Framework Convention on Climate Change (UNFCCC) in 1992, the UN has attempted to develop a legally binding treaty all countries will accept. As last Monday showed, their efforts so far have largely been unsuccessful. 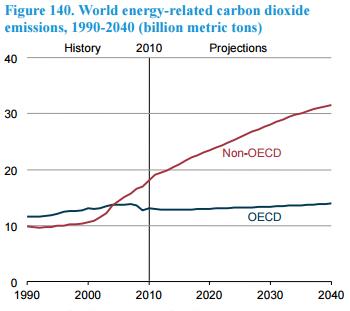 The fundamental questions surrounding the Paris talks and all climate agreements to date is who should be responsible for cutting emissions and who should bear the brunt of the associated costs. To date, most of the greenhouse gases emitted into the atmosphere have come from the developed world. However, according to the U.S. Energy Information Administration, the vast majority of new emissions will come from the developing world as emissions from wealthier nations have largely stabilized. If the ultimate goal is to reduce total emissions of heat-trapping greenhouse gases, then obviously the developing world will have to play some sort of role. And while conference delegates have generally agreed wealthier nations need to financially help poorer nations mitigate and adapt to climate change, there are legitimate questions about where that money will come from and how precisely it can be used.

Will the Agreement Be Binding?

Article II, Section 2 of the U.S. Constitution describes the legal treaty-making process. In order for the U.S. to sign a treaty, the Senate must vote by a two-thirds supermajority to ratify it. What ultimately doomed the Kyoto Protocol from the outset was the Senate’s opposition to any international agreement that did not require developing countries to also make emissions reductions. In fact,  the Senate passed the Byrd-Hagel Resolution in 1997 to express its position by a unanimous 95-0 vote. With the current composition of the Senate, a similar international climate agreement would also likely be dead on arrival in the Upper Chamber.

In order to get around the requirement for Senate approval, President Obama has indicated the American delegates will forgo a legally-binding agreement and instead push for a “politically binding” deal. Under such an arrangement, countries that fail to attain their emissions reduction levels will be “named and shamed” rather than formally sanctioned. Further, instead of developing a “new” climate agreement, delegates could opt to add new voluntary pledges to build upon the still-in-effect 1992 UNFCCC agreement, such as Obama’s pledge to cut US emissions by 26-28 percent from 2005 levels by 2025.

Could the U.S. be a part of a legally binding treaty without Senate approval? No; however, even if the deal is only “political binding” in nature, it could still have significant implications on domestic energy and environmental policy. That said, anything not legally binding can always be undone by a future president.

What is the “Green Climate Fund?”

A major component of all climate agreements to date is a recognition that the wealthier countries need to provide financial resources to developing countries to ensure those developing countries can pay to both help mitigate and adapt to the effects of climate change. Indeed, this principle is laid out pretty clearly in the classification of countries in the UNFCCC.

The Green Climate Fund was created in 2010 and is expected to be the primary apparatus participants in the Paris talks will use to finance such programs in the developing world as a part of any agreement. The goal of the Fund is to raise $100 billion per year by the year 2020. To date, however, the fund has received pledges amounting to just $10.2 billion, including $3 billion from the U.S., of which $500 million would come in the next fiscal year. It seems unlikely the current composition of Congress will appropriate that money.

Many developing nations have also signaled such a fund would be necessary to have up and running before they would sign off on any agreement. Some have also suggested such payments essentially amount to financial reparations to compensate poorer nations for past events and there should not be any restrictions on how this money can ultimately be spent.

Despite existing for five years now, many questions surrounding the Green Climate Fund still exist and will likely need to be hashed out in order to generate widespread support for any agreement.

Will an Agreement in Paris Keep the World’s Warming Under 2°C?

Leading up to the Paris talks, countries from around the world have made public commitments to cutting emissions. As indicated earlier, President Obama has committed the U.S. to cut emissions by 26-28 percent from 2005 levels by 2025. Similarly, the European Union has committed to a 40 percent reduction from 1990 levels by 2030. And finally, China has agreed its emissions will peak in 2030. These and other commitments represent roughly two-thirds of all current emissions.

According to scientists, these commitments will not be enough to keep global warming under 2°C. The solution, according to UN officials, could be twofold. First, every few years, these commitments would need to be revisited and ultimately made more stringent, and second, the UN will also consider working with “non-state actors” such as political subdivisions (e.g., cities, local governments) as well as the private sector.

So what does this all mean? If the stated goal of the conference is to develop “a legally binding and universal agreement on climate, with the aim of keeping global warming below 2°C,” the eventual outcome will likely fall short of this mark.

An agreement would only be made “universal” and “legally binding” if the U.S. Senate voted to ratify the agreement, which is all but impossible. Republican Senators (and probably a handful of Democrats, as well) will not want to further legitimize Obama’s Clean Power Plan – the main component of Obama’s American emissions reductions pledge– which could be on shaky legal ground and will likely be litigated for years to come. Any such agreement will also include calls for rich countries to lavishly underwrite the Green Climate Fund. Given the current budget situations in North America, Europe and elsewhere, such a massive transfer of wealth will likely be extremely unpopular with citizens of the developed world. Current pledges to the Fund are already far below the UN’s stated goal, likely making it more difficult for developing countries to sign onto an agreement. Finally, the Senate will likely oppose ceding any sort of sovereignty to an international body on this issue.