The 7th edition of Rich States, Poor States was recently released on Tax Day (April 15), and, as with previous years, numerous critics of free markets, limited governments, reasonable regulations, and low taxes have attacked the study. As with past criticism, they are mostly steeped in ideology that attempts to fit facts to pet theories, values, and biases. Nevertheless, it’s worth examining the data supporting Rich States, Poor States and rebutting the incorrect arguments advanced by the studies detractors using data and evidence.

Rich States, Poor States includes two rankings for each state. The first is the economic performance measure which looks at a state’s economic performance over the last decade using three equally weighted factors: state gross domestic product growth, net migration, and non-farm payroll growth. The second and more prominent ranking is the economic outlook ranking. This ranking measures a state’s forward looking economic prospects based on the extent to which the state is maintaining a free market, limited government public policy environment. This ranking also includes 15 equally weighted variables which measure factors such as tax policy, labor policy, government debt, and the size of the public sector.

Having established the background of the study, it’s worth leading with the cold hard facts. First, by simple analysis, the top 10 states in Rich States, Poor States economic outlook rankings perform substantially better over the last decade on state gross domestic product growth, migration, and employment growth. This despite the fact that some of these top 10 states (Indiana and North Carolina, for example) have just joined the top 10 and as such, many of the policies that these states have adopted have not had time to substantially affect economic performance. The table below details the results:

Note in the table above that states like California, New York, and Illinois, having vibrant cities that are widely desirable to live in, do not have outstanding performance and perhaps more notable, have hemorrhaged citizens over the last decade, despite the pull of the Bay Area, Chicago, and New York City. This map below tracks migration patterns over the last decade:

Moreover, rigorous statistical methods show that a higher economic outlook ranking in Rich States, Poor States does indeed correlate with a stronger state economy. The chart below comes from a study by Dr. Randall Pozdena and Dr. Eric Fruits and uses the Federal Reserve Bank of Philadelphia’s index of state economic health. Despite debunked analysis that continue to be touted by leftist detractors, the facts demonstrate that having a healthy free market, limited government policy climate matters a great deal to economic performance. Dr. Fruits and Dr. Pozdena’s results suggest that Rich States, Poor States economic outlook index explains between in 25 percent and 40 percent of the variation of state economic health. Given the tremendous number of factors that contribute to state economic growth, this is a fairly large estimate and certainly the largest factor that can be altered by policymakers. 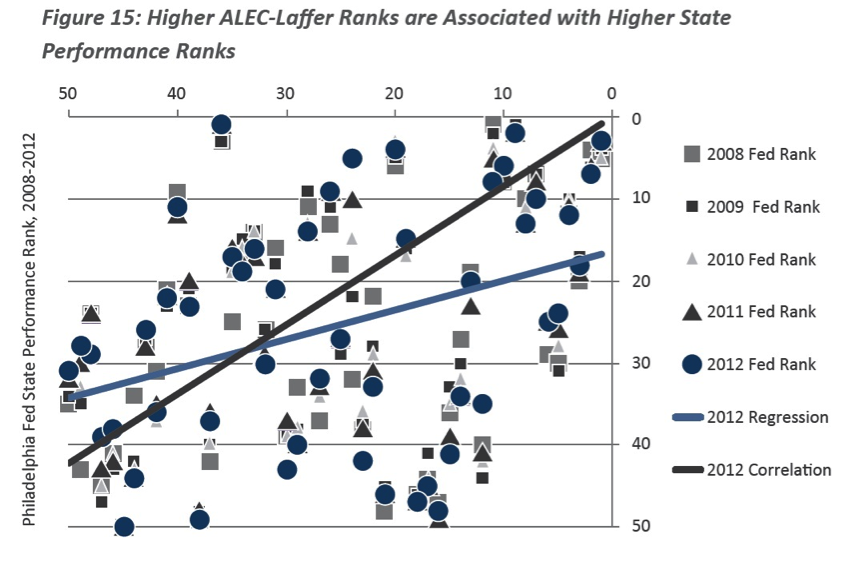 These broad facts established, it’s worth looking at the correlation between Rich States, Poor States’ economic outlook index and state economic growth and health in two additional ways. First, to consider what the index accounts for, what it doesn’t, and the extent to which what it does account for matters. Second, it’s important to consider at a few specific groups of states that have economic outlook scores that don’t perfectly match their recent economic performance.

Moreover, as we discuss extensively in the 3rd chapter of last year’s edition of Rich States, Poor States, we make no claims that state economic health is the only factor that affects state economic performance. Certainly, things like quality governance and basic public services, beautiful weather, natural resource endowments, the presence of innovation hubs, and the prevalence of talented labor and entrepreneurs matter. What is also true is that there is extensive evidence that economic freedom does matter to economic performance and that politicians can do little to alter the other factors that affect economic growth. Consider the research of Dr. Fruits and Dr. Pozdena, a literature review of the international results, a literature review of the relationship between taxes and economic growth, and a literature review of the relationship between Right to Work laws and economic performance. Basic public services are a small sliver of what government does and is largely satisfied in every state (or could be easily with substantially less tax revenue), natural resources is largely luck and lack of prohibitive regulation, weather is also luck, innovations hubs are difficult to be created by public policy (if they were not, presumably more states would have them) and talented labor and entrepreneurs will largely follow opportunity (which tends to draw to economically competitive states like a magnet). As such, policymakers looking to improve economic performance largely have free market policy reform as their only viable path towards greater prosperity.

We, therefore, don’t claim that the economic performance rankings from Rich States, Poor States predict all variation in economic performance. Just that those variations explain much of the differences and can be altered by policymakers with tremendous pro-growth effect.

Along these lines, it’s worth discussing a few groupings of states that have economic performance that has not matched their recent economic health.

States like Michigan, Wisconsin, Indiana, and Kansas have economic performance that varies widely from their current economic outlook ranking in Rich States, Poor States. The rationale for this divergence is clear: these states have recently engaged in fundamental policy changes that have improved their economic outlook ranking, but those changes have had little or no time to take effect and impact economic outcomes. That said, the future is bright for these states and we expect stronger growth in the coming years.

Florida and Texas are both states that are traditionally considered among the top free market states in the country and both have strong economic performance, particularly migration. Also, both rank highly (top 20) in the Rich States, Poor States economic outlook index but not in the top 10. In this case, a primary factor in the discrepancy between ranking and performance is that Rich States, Poor States does not weigh variables. Hence, though both Texas and Florida get some of the most crucial elements of state policy right (no income tax, low corporate tax, no death tax, right to work), their policy environment could use improving in other areas. Although Texas and Florida could use improvements in their policy environment, we consider them among the most competitive states in the nation in terms of public policy because they do get some of the most crucial and highest priority policies right. The long duration of their sound policy is a primary reason for their strong performance, particularly with respect to migration.

Washington and Oregon have extremely poor economic outlook rankings in Rich States, Poor States but also have fairly strong economic performance. For Oregon and Washington, they do have the benefit of having coastline on the Pacific Ocean and desirable metropolitan areas to live in. That established, it’s also the case that they improve their public policy environment for a few select “winner” firms through targeted tax breaks and other preferential policy.  In this way, they are able to compete for a few big firms by exempting those firms from their otherwise uncompetitive policy environment. Take Oregon for example: as a review of their economic performance points out, a tremendous amount of the state’s economic growth came from just one firm: Intel, which receives preferential policy treatment in the state. Washington is a very similar story. Both states are buoyed by a few large innovative firms with sweetheart public policy deals. For entrepreneurs and smaller firms that would otherwise like to expand, the economic reality of both states is far more brutal. That said, Washington does have one strong factor on its side: no state income tax. As mentioned previously, having zero state income tax is a major boon to economic performance and Washington is the beneficiary of that sound policy.

Claims that free market public policy doesn’t matter to state economic performance are unsupported by empirical studies of those specific policies, empirical studies comparing economic performance and economic freedom (state level and internationally), and the bulk of economic theory, which suggest that when firms and people are allowed to keep more of their own money to invest and are not stifled by government in their productive and creative efforts in a given area, that area thrives. Attacks on Rich States, Poor States rely on denying these facts, “strawmaning” our research by claiming we purport to describe all variation with growth with our study, and denying the legitimacy of bold policies reforms by refusing to give them time to demonstrate economic performance.

In short, our critics are forced to dishonesty in an effort to deny the obvious: economic freedom works. When government sticks to the basic facilitation of capitalism instead of redistribution and economic micromanagement, economies thrive. Rich States, Poor States continues to document economic freedom across the 50 states for citizens, businesses, and policymakers that recognize the importance of their state’s economic climate.