A Modern Day Patrick Henry – “Give Me Liberty…” 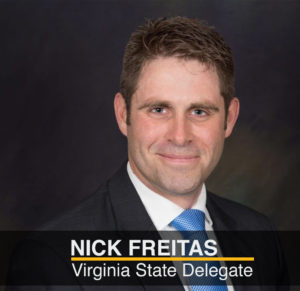 This week, ALEC and FreedomWorks introduce Virginia State Delegate Nick Freitas from the 30th district. Freitas represents Orange County, Madison County and part of Culpeper County. In his first term, Freitas serves on the Finance Committee and the Science and Technology Committee.

I believe that we need more people in elected office dedicated to the philosophy that government’s primary responsibility is to protect the people’s liberty and property. This means maximizing freedom, protecting the free market and ensuring equal protection under the law. At all times, government should stay within its proper Constitutional limitations.

It would be a toss-up between education reform and standing strong against attempts to expand Obamacare. Education reform is desperately needed if we are going to ensure that the United States stays on the forefront of economic innovation. By the same token, expanding Obamacare in Virginia would have disastrous effects for the hundreds of thousands of Virginians who require access to affordable and quality healthcare. I want genuine healthcare reform, which means I understand that until we have a proper market place for healthcare, we can expect to see the healthcare debate dominated by politics, instead of a real focus on providing quality services at competitive rates. Unfortunately, there are too many people in politics that refuse to accept any consideration of a healthcare solution, unless they as politicians can control it.

Education reform. If we are serious about providing quality education that works for students, parents, and teachers, we need systemic reform. Right now, government maintains something of a monopoly over education. This restricts supply while at the same time creating perverse incentives which demotivates teachers and students alike. Students should be treated as valued customers, not as a burden. If we give parents more control over how their education dollars are spent, we would see a boom in educational opportunities tailor-made for individual children, as opposed to the “one size fits all” government approach. Hard working teachers would finally be appropriately compensated for their hard work while having more control over their classrooms. It is time we empower students and teachers alike by embracing genuine choice within education.

Increasing budget transparency and education reform that has led to greater local control over career technical education. The only way we will ever be able to get to the kind of broad-based tax and regulatory reform we desperately need in Virginia, and the country as a whole, is when citizens have greater insight into how government spending and over-regulation harms our economy as a whole. Greater government transparency, and providing students with more access to the industries and businesses, will eventually work to provide the kind of education necessary to ensure an informed citizenry, prepared to both compete in a 21st century global economy and to hold their government accountable.

The quality of the research that ALEC provides combined with the accessibility of it is invaluable. There are many institutions which provide valuable research, but ALEC has done an exceptional job of providing information in formats which are easy to distribute to the public. In politics, it’s not just about having the best argument, but having the most relevant one to your audience.

My children desperately wanted a cat, which I am allergic to. So I sat down and after hours of intense negotiation they wrote out a contract where they had to regularly wash my car and make me coffee every morning in order for them to keep the cat. A week later the cat ran away and the kids stopped making me coffee. When I called them on it, they protested that the cat was no longer there. I told them to check their contract, they still had a cat, it just didn’t live here anymore. A month later they had a different cat. I told them it was contract time again, when my daughter looked at me and said, “read your contract dad…it doesn’t say which cat.”