Scott Winship, one of the profession’s sharpest minds on income inequality, has already dismantled a related S&P study on the supposed connection between income inequality and economic growth. As he notes, “the case is in tatters.” Winship’s post is worth reading in its entirety, as it thoroughly debunks the notion that income inequality and economic growth are strongly tied. Winship points out the numerous studies contradicting S&P’s research, most of which they fail to cite or address in their publication. Moreover, Winship notes that S&P fails to adequately address income mobility, which measures the chance for individuals to make their way up the income ladder and into a higher income group, and instead focusing on income inequality. Winship’s response leaves little question that the veracity of S&P’s study is deeply in question.

Setting aside measurement issues with inequality, there are some big conceptual issues in thinking about inequality, and any call for government action requires connecting a statistic to some sort of social ill or injustice. Will Wilkinson, in a paper for the Cato Institute titled “Thinking Clearly About Economic Inequality,” sets out a clear blueprint for how inequality should be considered in terms of public policy.

There are two key ways inequality matters and should be considered seriously. One is if inequality is the outcome of some injustice in our society. Take corporate cronyism: the dynamic by which big business or powerful individuals are enriched by government policy that benefits the few powerful but is not in the interest of the nation as a whole. To the extent that accumulation of income in the top 1 percent is the process of cronyism, said income accumulation should be taken quite seriously (see Timothy P. Carney and David Schmidtz). Those unjust policies should be eliminated, though not on ground of inequality: on grounds of injustice. Thus, inequality is just a metric by which injustice is potentially (but not necessary) detected.

The other is when inequality is the result of poor prospects for opportunity among middle and low income Americans. To the extent that inequality is the result of stagnant or falling wages, or slow job creation, we should take inequality as a sign that something is not well in our policy environment. But here again, we should strike at the root cause: poor opportunity, also known as “income mobility.” Income mobility is the measure of how likely children born into lower income groups are to make it into higher income groups than their parents as they grow up.

What should not be considered alarming is the gap in wealth, in and of itself. Inequality does not possess an inherent moral or economic challenge. Inequality is but one measure and shouldn’t overshadow more important measures of the health of an economy: income mobility, job creation, median wage growth, entrepreneurship, and economic growth.

The takeaway here is that inequality is troubling when it is the symptom of a deeper problem of poor public policy such as low growth or cronyism, and those underlying issues must be repaired. But in the case of income divergence in a fast growing economy if all incomes are rising and standards of living are improving, it is a second order concern that does not warrant harming economic growth for correction. Income is the reward for hard work, sound capital investment, entrepreneurship and innovation. Given the growth of mass markets and consumption, the return for these productive activities can indeed be expected to be increasing. Moreover, income growth is not a zero-sum contest between the top one percent and the rest of income earners. The gap between high income earners and the rest does not harm individuals in any direct way. Individuals are harmed by low income growth, joblessness, high consumer prices, and poor prospects of economic mobility. Meanwhile, the productive actions that garner high income at the top of the income distribution, assuming no cronyism is at work, benefit all consumers and the gains from productive behavior are generally reinvested in the economy, thus providing additional opportunity for all income earners. The metaphorical rising tide of economic growth carrying all boats upward is the reality of high growth, high divergence economies.

But states with broken public policies and anemic growth pose an entirely different matter than the generalized case of income inequality in a capitalist economy. If median wage income is stagnant due to low economic growth while high income earners still see income growth due to the growth of global markets and mass markets, income inequality will increase. Thus, low economic growth can itself be a cause of income inequality rather than the other way around. The related case is that states that are hostile to business and the wealthy may see talented individuals flee the state, potentially lowering income inequality, but also the economic prospects of the state’s citizens. Or instead, if many more low and middle income individuals flee a given low-opportunity state looking for opportunity elsewhere, while the wealthy tend to stay, income inequality will increase but not due to any income gains of top earners. Thus, increasing or decreasing income inequality in a state or country is ambiguous as a statistic without context. Considering the wellbeing of citizens in a given state requires far deeper analysis than a simple review of income inequality data. It is but one measure and a murky measure at best in terms of wellbeing.

The broader lesson here is that income inequality is secondary to more primary measures of the individual wellbeing of citizens continued focus on income inequality obscures the far more important matter: income mobility. What we should care about is the potential for Americans to exceed the opportunity they were born in to and make their way up in the world. Income mobility is a totally separate measure than income inequality and is of far greater consequence to the health of citizens. Crucially, research on income mobility shows no substantive increase or decrease over the last 50 years. Thus, while our income mobility in America and in many states is unsatisfactorily low, it is not the case that mobility is decreasing over time. Research suggests that income mobility is driven by policy fundamentals: quality education, economic growth driving income and job growth, sound institutional rules that facilitate property rights and just exchange and an innovative culture of start-up business. The map below shows measures of mobility across the nation with lighter shaded areas representing higher levels of mobility: 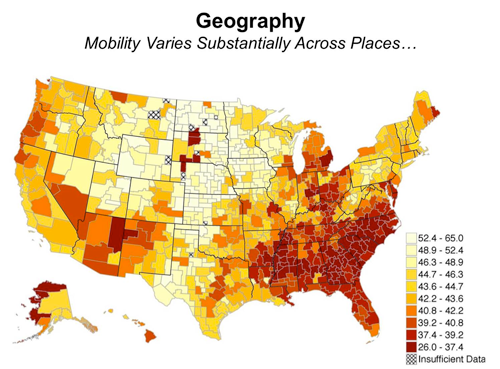 States should develop a policy framework that embraces supercharged growth, facilitates high social mobility and avoids special preferences to the wealthy and well connected. The question is of strong economic fundamentals, not tinkering with income distributions. States should not engage in counterproductive redistribution schemes that lower economic growth. We know from the research of the Tax Foundation (view in two parts, here and here) that the vast majority of research shows that taxes lower economic growth.

Similarly, our own research shows that the extent to which a state embraces a free market, limited government public policy environment affects potential for economic growth. Thus, increasing taxes and redistribution towards the goal of a more even income distribution is likely to be counterproductive towards the end of improving the material wellbeing of citizens outside the top one percent. The scatterplot and table below show the connect between state economic health, measured by the Philadelphia Federal Reserve Bank’s Index of state economic performance, and state economic freedom, as measured by ALEC’s own Rich States, Poor States Economic Outlook Index. As the table shows, between 25 percent and 40 percent of the difference in state economic performance is attributable to a state’s public policy climate. 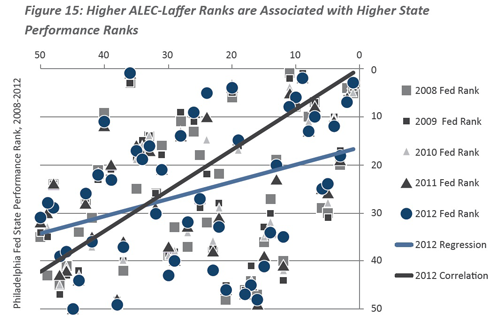 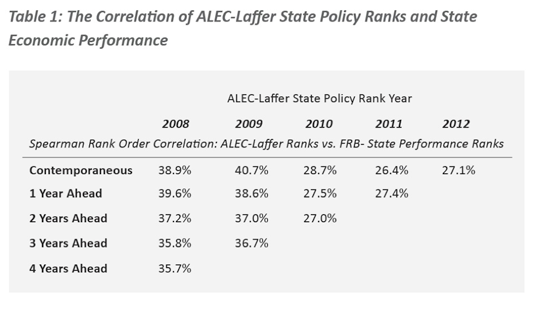 S&P overlooks the effects of taxes and government policy in their study. Consider below the states with the highest income inequality using both the Gini Coefficient, a measure of income inequality frequently used by economists, and the share of income commanded by the top one percent, which can viewed as a time series here: 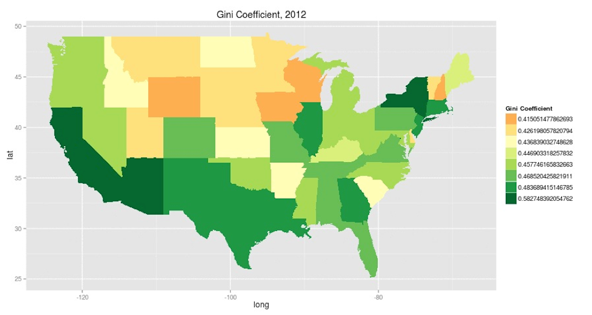 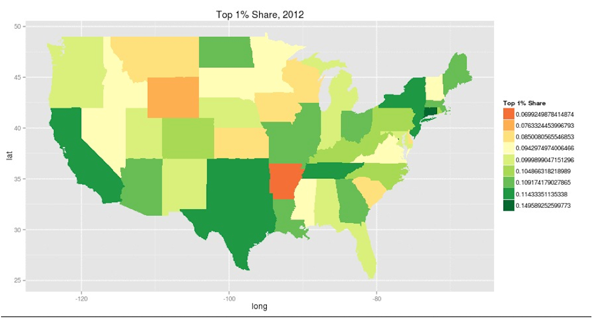 Many of the states with high inequality and declining revenue have high state tax burdens and high personal and/or corporate income tax rates, such as New York, California, Illinois and Massachusetts. These states also have problematic public policy environments in areas like regulation, civil justice and the fiscal burden of government. It’s likely that these states developed these tax policies, at least in part, in response to perceived problem with income distribution in their state. But given that these policies lower economic growth, they also will generally lower tax revenue, given that tax revenue growth is largely predicated on growing business activity, growing incomes and growing consumptions—hallmarks of a high performing economy. This creates an issue of correlation: are states with high income inequality seeing slow revenue growth slow due to some fundamental relationship, or instead because of their poor public policies selected in part as a response to income inequality? Moreover, how much of inequality is driven by these states’ poor public policy environments that stunt median income growth and job growth? Much evidence points to the latter two possibilities, but, more problematically, this creates a statistical issue in identifying the fundamental cause of slowing revenue that S&P does not seem to have dealt with adequately.

All of this analysis leads to a central conclusion: far from inequality being the “fundamental issue of our time,” it is instead one somewhat ambiguous measure of well being at best, and a red herring at worst. The fundamental issues of our time are economic opportunity, economic mobility and economic growth. Notwithstanding efforts to tie economic growth to income inequality, the actual matter of consideration remains economic fundamentals: How does a state grow incomes, grow jobs, spur innovation, embrace entrepreneurship and attract out of state labor, firms and capital. The evidence continues to suggest that to do so, a state should provide the bare essentials of rule of law and public services only government can provide with low and efficient taxes, while keeping regulatory burdens low. This strategy will solve the problematic aspects of income inequality, while dealing with the most crucial issue of economic policy: growing jobs and growing incomes.