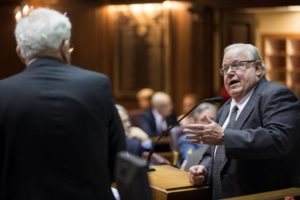 ALEC and FreedomWorks introduce the Legislator of the Week: Indiana State Representative Woody Burton. Representative Burton has been a key player in promoting positive change for Indiana since joining the General Assembly in 1988. He is the current Chair of the Commerce, Insurance, and Economic Development Taskforce at ALEC. One of Rep. Burton’s legislative priorities has been to permanently repeal property taxes in Indiana. During the 2007 session, he was instrumental in passing legislation that capped property taxes. Representative Burton has also been diligent in working to improve the mortgage industry through improving foreclosure prevention programs, increasing land bank opportunities, and instituting tax incentives for businesses to renovate empty buildings. He and his wife, Volly, have been married for 33 years and are active members of Franklin Memorial Christian Church. They also work together in the real estate brokerage business. The couple has three children and six grandchildren.

I ran for office back in 1988 because I saw people in a constant struggle with the government. I wanted to do right for the people of Greenwood and Whiteland, and help break the constant struggle they were stuck in.

I believe the biggest issue facing the state of Indiana today is our desperate need to fix the Department of Child Services. We have over 24,000 children in our DCS system in Indiana and our state has a total population of 6.6 million people. When you look at our neighbors Ohio and Illinois, they have around 12 million in total population and have 10,000 less kids in their DCS system. There is a clear problem with that, and I want to work towards fixing it.

If I had one wish for our state, it would be that the Department of Child Services would be completely revamped, so that all Hoosier kids can come home to a safe and loving environment.

There are two specific laws that I am very proud to say I was a part of. First, back in 2006, I authored a bill making an “In God We Trust” license plate. This license plate has been one of the most popular ones in Indiana since coming out more than a decade ago, and gives Hoosiers the opportunity to express their faith with our nation’s motto. The other piece of legislation I am most proud of is a bill I authored in 2015 defining dyslexia, which requires educators to take a training program that teaches them the characteristics of dyslexia and how to best help those children. I am dyslexic, and I know the lifetime struggle dyslexia can bring to someone. I wanted to help children with the disability to have a more fair fight than I had.

ALEC has helped me expand my knowledge of other state’s laws, and has therefore helped me become more informed when similar bills come before us on the House floor in Indiana.

I am a huge car buff! I have a 1938 Ford Firetruck that is often used in parades in my district. I also have a 1998 Chevy Corvette convertible and a 2016 Chevy Camaro convertible. I just recently sold my father’s 1953 Chevy Corvette to a museum (attached). I also was lucky enough to get the chance to drive a race car around the track at Indiana Motor Speedway for my 70th birthday. 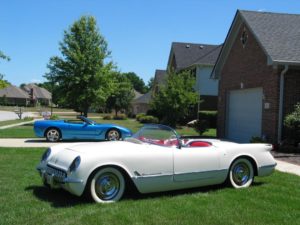