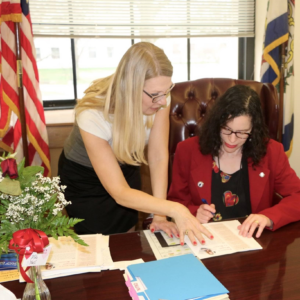 This week, ALEC and FreedomWorks introduce West Virginia State Senator Patricia Rucker. Senator Rucker is a former teacher who is raising and homeschooling her five children with her husband of 20 years. Patricia is a co-founder and former president of We the People of West Virginia-Jefferson County. She is a first-generation American citizen, born in Caracas, Venezuela, coming to the US, Montgomery County Maryland, in 1981. She has been a Harpers Ferry resident since 2001 and her hobbies include gardening, beekeeping and raising chickens and ducks on her small hobby farm. Patricia’s committee assignments include being Vice-Chair of Agriculture and Rural Development; member of Judiciary, Education, Health and Human Resources; and Transportation and Infrastructure. Senator Rucker is part of the Education and Workforce Development Task Force at ALEC.

I ran for office because I wanted to help turn West Virginia around after 83 years of control by one party in the legislature. I ran as a limited government, lower taxes, and personal freedom candidate.

Under the party that had 83 years of control of both legislators, the government grew much faster than the population did. Now it is too big with excessive and burdensome regulation. We need to scale it back to a more reasonable size to allow our economy to grow.

Senate Bill 18 last year which repealed Common Core and made it so the state school board cannot accept another federal mandated educational program tied to funds. It didn’t make it through the House, but we put most of the language into another bill and that passed.

ALEC provides information on many topics I am interested in and encourages networking with other legislators who provide inspiration and ideas.

I was the only girl in a family of five, and have experience defending myself and my opinions. That background certainly helps me now as one of four women Senators in West Virginia!