Myth of the Day: Real Household Income Has Not Grown in the Last 20 Years

One key tax myth that drives much of the desire for redistribution is the notion that real household income is not growing for any group but the wealthiest  Americans. The notion of income stagnation among the middle class, along with the sister myth asserting that the income distribution is increasingly inequitable, are used to argue against an economic model characterized by people generally keeping their earnings except a small portion paid to fund the core functions of government. The truth is that during the last 20 years, the American economy has continued to generate income growth and increasing ability to consume for Americans of all income levels, not just the wealthy.

Dr. Randall Pozdena and Dr. Eric Fruits separate fact from fiction regarding middle class wage stagnation in their recent publication, Tax Myths Debunked. They start by charting the stellar increase in median family cash wage income over the last hundred years. The chart shows tremendous wage growth until the last 20 years, which are instead characterized by a similar pattern as economic performance as a whole during the period: a number of “boom” periods of quick wage growth followed by major subsequent “busts” or crashes in earnings. 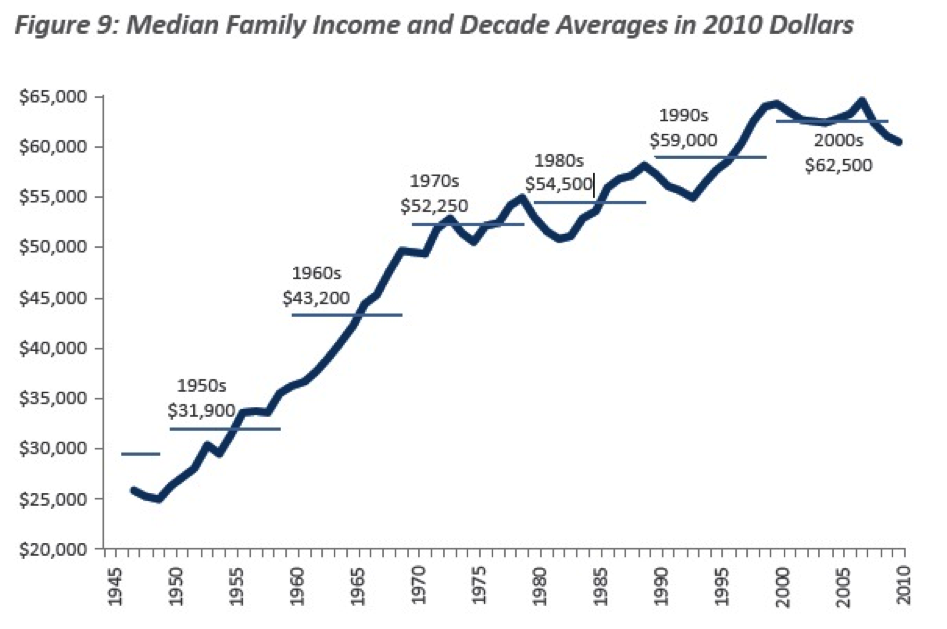 Before diving any deeper into the data, it’s worth briefly noting that given the stagnation in wages is largely the result of a massive boom and bust cycles that occurred during the period, wage stagnation is only the fault of the market to the extent that both recessions were  the fault of the market. That is a dubious proposition, particularly when one considers the extensive government involvement in advancing “affordable housing” in the mortgage market which subsequently crashed, pulling the rest of the economy down with it. Not only this, but it is  well worth considering the sum of policy decision made by government (both federal and in some states) that have damaged the economy’s growth prospects, particularly for the middle and lower class. Government interventions in the economy always entail economic costs and often those costs can be substantial, forcing real people to bear real economic consequences.

Setting this point aside, it is still the case that the American economy has been a tremendous engine of income growth for the middle class over the last decade. Dr. Fruits and Dr. Pozdena point out four key ways in which traditional median family cash income statistics distort to the true earnings growth of the middle class:

Dr. Fruits and Dr. Pozdena chart the data generated by the research of Burkhauser, Larrimore, and Simon, which corrects for each of these four issues. This chart paints a more accurate picture of middle class wage growth over recent decades. Once these four factors are accounted for, wage growth jumps from 0 percent up to 37 percent: 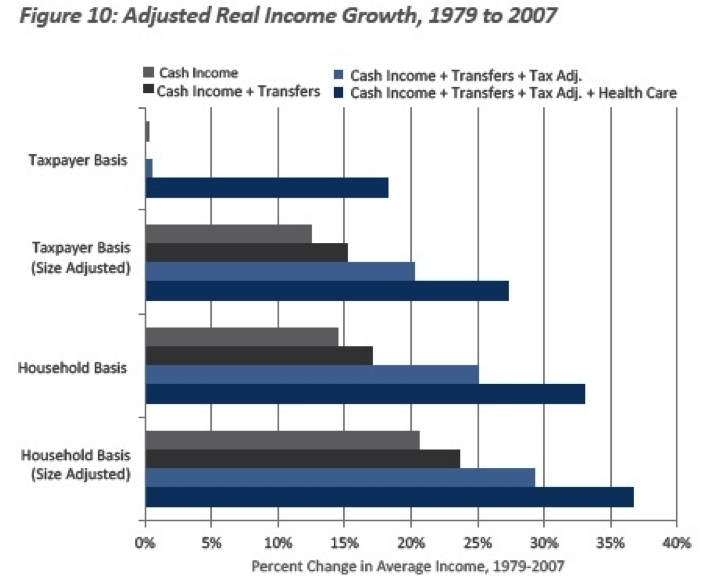 Moreover, this ignores substantial changes in the price and quality of goods purchased by wage earners. As economists Dr. Steve Horowitz and Dr. Donald Bordeaux point out in separate videos embedded below, the number of work hours needed to command various goods has been falling while their quality has been radically improving in terms of longevity, features, bundling of multiple goods, cost to operate and maintain, and quality of experience. These factors also bear heavily on the question of middle class economic performance in America over the past 20 years.

Finally, many of these concerns regarding inequality are not only dubious in terms of data, but distract from the more important goals of tax policy: efficiently generate revenue for the core functions of government to  be provided while minimizing the damage to growth. As we have recently pointed out, both in Tax Myths Debunked and in two blogs, taxes harm the economy and soaking the wealthy with taxes harms economy. Maximizing economic growth is indeed the formula to improve the lot of all Americans, particular the middle and lower income citizens of the nation.

To read more about the relationship between tax policies, stimulus spending, and their effects on an economy during a recession, check out Tax Myths Debunked. Co-authors Dr. Pozdena and Dr. Fruits use overwhelming evidence to confirm that the path to prosperity is in free-market, pro-growth policies. The report is available for free download at www.alec.org/tax-myths-debunked.