With millions of families across the country still struggling to recover from the Great Recession, a deeper look at how some states fared through recessions versus less fortunate states may provide state policy makers with some ideas for how to get their citizens working again.

Joining North Dakota, the three other states that saw the greatest decrease in their unemployment rate compared to the rest of the country were West Virginia, Alaska, and Louisiana. 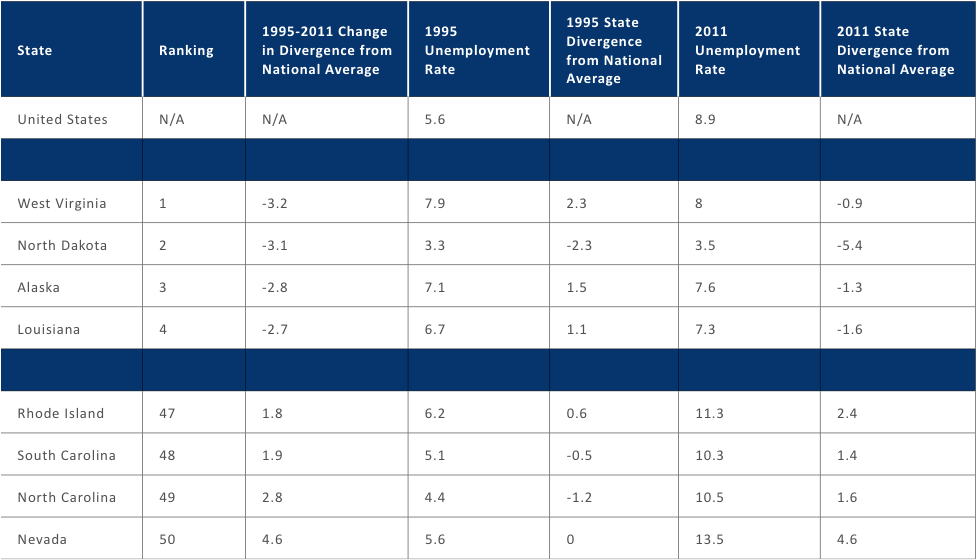 It’s hard not to immediately notice what these four states have in common: each has strongly embraced energy exploration and development.  Although many factors likely influence unemployment rates in different  states, there appears to be a relationship between energy friendly states and job growth or, at the very least, insulation from huge job losses during times of economic recession.

The state of West Virginia has long been identified as a major coal producing state.  In fact, West Virginia produces more coal than any other state east of the Mississippi River and ranks only second to Wyoming nationally.

With the technological improvements associated with hydraulic fracturing, the oil and natural gas industry has exploded in North Dakota.  Currently the second largest producing state of crude oil in the nation, North Dakota saw oil production increase by a whopping 35 percent over the course of only one year between 2010 and 2011.

Alaska is another significant oil producing state, currently ranking third in the country.  The Prudhoe Bay Oil Field on Alaska’s North Slope is easily the largest source of oil in the nation.

Louisiana is also a major energy producer.  Currently the second largest natural gas producing state and the seventh largest producer of crude oil, Louisiana is home to 18 operating refineries, second to only Texas in number and capacity.

Not every state is lucky enough to be lying on top of vast energy reserves, but those that do stand to benefit immensely from creating regulatory and policy structures that enable energy development while protecting the environment. State lawmakers can look at other states such as North Dakota as models for how this can be done. In addition, states without vast energy reserves can still benefit from the ancillary economic impacts of energy production in other states. Overall, the country will be better off with policies that enable energy development not hinder it.

Portions of this article originally appeared in the July/August edition of Inside ALEC. To see the complete article, click here.