How can state policymakers best position their states to thrive?

The answers can be found in today’s release of Rich States, Poor States: ALEC-Laffer State Economic Competitiveness Index. Co-authored by economists Arthur B. Laffer, Stephen Moore and Jonathan Williams, the report, now in its 13th edition, ranks the 50 states on Economic Performance and Economic Outlook. These rankings are based on  equally weighted policy variables that have a proven impact on the migration of capital – both investment and human – into and out of states.

For example, what are the top personal and corporate income tax rates in a state? Does the state levy an estate tax? How large is the property tax burden? What is the state minimum wage? Is there a Right-to-Work law? In total, 15 policy variables are examined to calculate the Rich States, Poor States ranking on Economic Outlook, which is a forecast on state economic growth.

The Economic Performance ranking reveals how state economies are currently performing. This ranking is based on three variables: Cumulative GDP Growth, Cumulative Domestic Migration and Non-Farm Employment Growth. In other words, how much is a state’s economy producing? Are citizens moving to the state or fleeing to greener pastures? Are jobs being created?

In addition to the latest rankings and data, RichStatesPoorStates.org features an “Adjust Policies” tool that allows users to see how a policy change would impact their state. 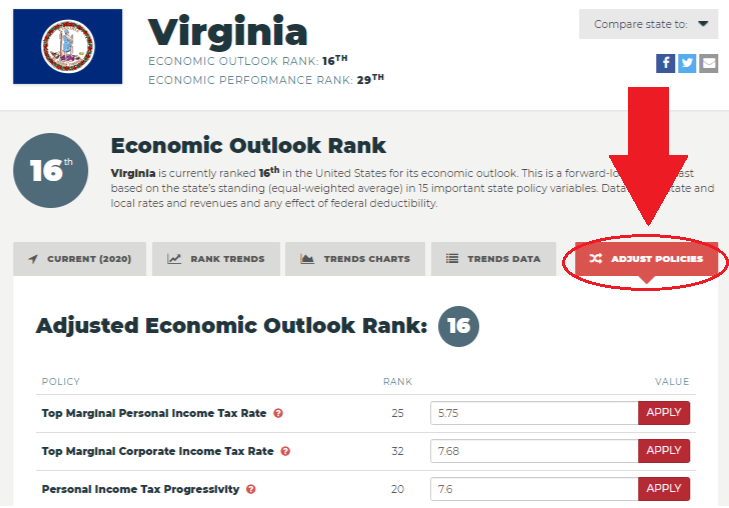 As legislators grapple with the economic fallout from COVID-19, it is more important than ever to adhere to free market and limited government principles that empower states and their citizens to thrive. To that end, the new edition of Rich States, Poor States will serve as a valuable guide.