Today, the U.S. Department of Commerce released third quarter economic growth figures, and it is great news for Americans that have been struggling due to the pandemic and economic lockdown orders in many states. According to the report, real GDP surged by a record 33.1% in the third quarter of 2020 – the fastest GDP growth ever recorded, post-World War II. 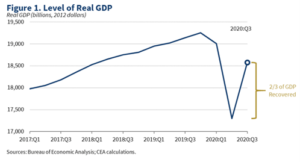 The numbers reinforce the fact that, before COVID-19, the United States was enjoying one of the longest economic booms in American history. It was extended thanks in part to pro-growth federal tax relief and regulatory relief spearheaded by the Trump Administration and free market members of Congress. Also, more than 30 states have significantly reduced their own tax burdens over the past five years, adding to America’s resurgence in economic competitiveness.

States with best policy responses to the pandemic likely played a role in another positive report released today. The Labor Department reported that U.S. jobless claims are at their lowest level since the pandemic began – down by 40,000 from the previous week to a seven-month low.

In addition to ALEC state legislators taking the lead nationally, many governors across America are working to ensure both public safety and economic challenges are met with prudent policymaking.  Taking a look at the state level results, states like Nebraska, South Dakota and Utah – with highly rated governors and strong free market policies – enjoy some of the lowest unemployment rates in America. On the other side of the equation, states like New York, New Jersey, Rhode Island and Hawaii have governors who received poor marks for their handling of policy during the pandemic and have suffered from anti-growth policies for years.

While the new national GDP numbers and the jobless claims report are a breath of fresh air, you would never know that based on much of the media coverage. For example, The New York Times is saying that “the best GDP report ever” is “misleading.” NBC News says “the blowout figure is not what it seems.” Meanwhile, CNN admits the economy “probably grew at record speed…but the crisis isn’t over.”

Despite record-setting third quarter GDP growth, some media outlets seem to be obscuring indicators of a strong economic recovery. Much of the coverage this week maintains the pessimistic economic outlook found in news reports on first and second quarter GDP numbers earlier this year.

As much as many would like to downplay today’s numbers, it is undoubtedly good news for hardworking Americans. Today should be a day Americans come together and celebrate our shared economic success as we work together to recover from unprecedented challenges caused by the pandemic.