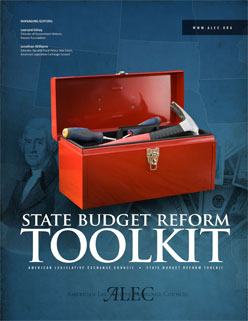 While 49 states have some kind of a balanced budget requirement, budget challenges are a stark reality for numerous states. When lawmakers use temporary fixes to address structural budget problems, they can expect to confront greater problems down the road. A new report by the Volcker Alliance, Truth and Integrity in State Budgeting, analyzes New Jersey, California and Virginia to identify best fiscal practices. The report echoes many fiscal policy solutions that the ALEC Center for State Fiscal Reform researched and recommended in The State Budget Reform Toolkit.

New Jersey continues to make headlines for its fiscal woes:  the state’s economic outlook ranks nearly dead last in the nation, according to the 2015 Rich States, Poor States ALEC-Laffer State Economic Competitiveness Index. In fact, the Volcker Alliance report estimates that the Garden State has $90 billion in unfunded pension and other retirement liabilities. Finally, New Jersey’s rainy day fund, the Surplus Revenue Fund, has maintained a zero balance for the past several years.

The Volcker Alliance notes that California’s finances are among the most unpredictable of any state. Furthermore, the Golden State’s tax-and-spend policies caused the state to rank 44 out of 50 in economic outlook in Rich States, Poor States.  Since California’s revenue is highly dependent on capital based taxes, the report finds Sacramento is “held hostage to the vagaries of the stock and real estate markets.” As a result, the Golden State overspends in boom years. If lawmakers do not align spending with revenue, the Volcker Alliance warns the state will face even greater fiscal challenges. The study also estimates that California has a staggering $195 billion in unfunded pension and other retirement liabilities.

On the other end of the spectrum, Virginia, which earned a top-15 ranking for economic outlook in Rich States, Poor States, has promising fiscal management practices. The Volcker Alliance highlights the Old Dominion’s independent revenue forecasting model, which also follows best practices in the ALEC Task Force on Tax and Fiscal Policy’s Independent Revenue Forecasting Act, a model policy that calls for a wide variety of non-partisan perspectives on revenue estimates. For example, Virginia bases six-year revenue forecasts on input from the Joint Advisory Board of Economists and the Governor’s Advisory Council on Revenue Estimates. Legislators, outside economists, business leaders and state officials are all included in the process. The wide variety of perspectives allows leaders to focus on expenditures, instead of debating the revenue forecast.