Earlier this session, Washington Governor Jay Inslee signed into law S.B. 2156, officially establishing a cap-and-trade program in the state – a type of carbon pricing program that works by setting a cap on emissions and requiring businesses to buy and sell emissions credits within that limit.

Washington State currently has the fourth lowest electricity prices across the country, as depicted in ALEC’s recent Energy Affordability Report. Despite having other consequential policies in place, including a Renewable Portfolio Standard (RPS), state electricity prices average roughly around 8.04 cents per kilowatt-hour (KWh). However, this could change very soon with the passage of this bill.

Now, Washington is the second state to implement its own cap-and-trade program (California was the first). Other states participate in a cap-and-trade program called the Regional Greenhouse Gas Initiative (RGGI) in the Northeast and Mid-Atlantic regions of the United States (Virginia joined RGGI this year).

As revealed in the table below from ALEC’s Energy Affordability Report, these states rank 36th or worse for average electricity price. Clearly, cap-and-trade programs are associated with higher electricity prices. 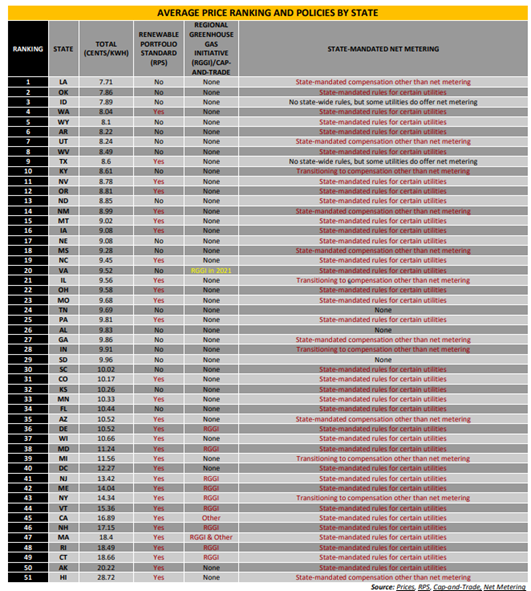 In addition to the new cap-and-trade program, Washington State also passed a Low Carbon Fuel Standard (LCFS) with H.B. 1091. This will undoubtably lead to higher fuel prices for Washingtonians.

Thanks to this pairing of legislation, citizens of Washington State could soon experience higher energy prices from their electricity bills and at the fuel pump. Unfortunately, studies show that cap-and-trade and LCFS programs have negligible, if any, positive effects on the environment. The higher energy prices resulting from these costly programs also place a heavy burden on low-income families and individuals.

Legislators would be wise to consider these factors and pursue policies that achieve real environmental outcomes through private sector innovation.