This year marks the 25th anniversary of the World Wide Web since its initial proposal by Sir Tim Berners-Lee in 1989, prompting the Pew Research Center to release its latest re 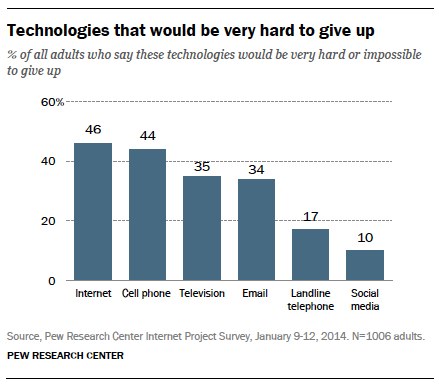 port, entitled The Web at 25 in the U.S. The report looks at a combination of objective metrics for Internet penetration, as well as survey results of how users perceive the Internet. On the whole, the internet has fundamentally changed the way we interact with the world—from creating content, to interacting with our government, to taking care of our health. Regardless of how people use it, the Internet is clearly becoming more essential. In 2006, only 38 percent of adults said that the Internet would be difficult to give up. Today, that number has surged to 53 percent. But, 62 percent of Internet veterans—individuals who began using the Internet before 2000—reported that the Internet would be very difficult to give up. Only 46 percent of users who started in the 21st century agreed.

Based on decades worth of assessments from the Pew Research Center, the Web is ranked as the fastest deployed technology in history. Pew’s 1995 survey revealed that only 14 percent of adults had Internet access, while only 58 percent of individuals surveyed had even heard of the Internet.  Fast forward to 2013 and the growth rate of access and use shows no signs of reversal. A breakdown of the Pew report confirms common correlations found in past studies: education and income are directly related to computer ownership and Internet usage. For example, the gap between adults with a college degree who use the Internet and adults with a high school diploma who use the Internet has hovered around 30 percentage points for the past 20 years. Age is also an important indicator of internet use levels, with 89 percent of 18-29 year olds reporting computer usage, compared to only 56 percent of adults aged 65 and older.

While critics claim the U.S. is lagging behind other countries in terms of broadband adoption, Internet adoption rates for low-income users appear promising. In fact, 77 percent of households earning less than $30,000 per year use the Internet. Fortunately, consistent investments from broadband providers are further increasing that availability; programs like Comcast’s Internet Essentials have successfully connected more than 1.2 million low-income Americans to at home Internet service. Programs like this ensure that the current existing gap will be narrowed in the coming years. Other tech companies belonging to Internet.org—a technology consortium aiming to bring Internet access to poorer countries—have committed to encouraging economic growth and the development of a global online community. The goal is to replicate for developing nations the positive individual and social benefits seen so far with the advent of widespread Internet access. The 1,006 users Pew surveyed in The Web at 25 generally agreed with that assessment: 90 percent said that the Internet has been a good thing for them individually, and 76 percent said it has been good for society.