ARLINGTON, VA (January 29, 2020) Today, with national leaders and state legislators by his side, President Trump signed into law the implementing legislation for USMCA—a modernization of the 1994 North America Free Trade Agreement. Throughout the trade agreement debate, state legislatures have been instrumental in indicating broad-based support for the renegotiated agreement. Over the past year, 18 states introduced or passed resolutions supporting USMCA.

“The new trade framework is a vast improvement over NAFTA,” said ALEC CEO Lisa B. Nelson. “With all but one state counting Canada or Mexico as a top-three trading partner, USMCA will create thousands of new American jobs and spur billions of dollars of economic growth across the states.”

“ALEC was among the first to applaud the strength of USMCA’s original intellectual property (IP) chapter – the most comprehensive of any multilateral agreement in history,” said Karla Jones, ALEC Sr. Director for International Relations. “And while IP provisions were substantially weakened during the negotiation process between the Administration and Congress, this deal will benefit other sectors including manufacturing and agriculture and the American economy overall.” 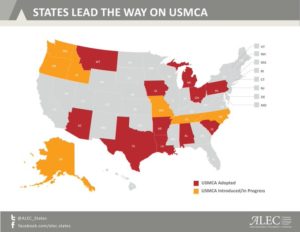 The American Legislative Exchange Council is the largest nonpartisan, voluntary membership organization of state legislators in the United States. The Council is governed by state legislators who comprise the Board of Directors and is advised by the Private Enterprise Advisory Council, a group of private, foundation and think tank members. For more information about the American Legislative Exchange Council, please visit: www.alec.org.