As 2014 draws to a close and the final few state legislatures still in session prepare to finally adjourn for the year, the ALEC Center for State Fiscal Reform has again published State Tax Cut Roundup, which details the states that cut taxes in the 2014 legislative session. During the 2014 legislative session, 14 states passed significant tax cuts into law. These cuts vary in what tax they reduced and their size but they share one crucial similarity: they put more money into the pockets of taxpayers in their respective states. Those 14 states are detailed in the map below: 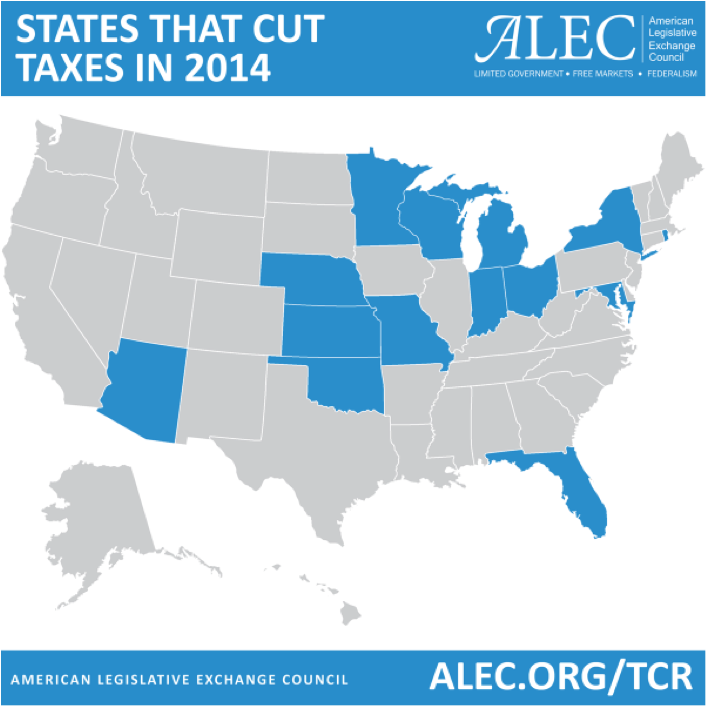 All 14 of those states passed substantive tax cuts during the 2014 sessions that conformed to the ALEC Principles of Sound Tax Policy and the net result of the totality of the legislative session is negative revenue. The paper chronicles the details of each state tax cut that qualified in the paper, as well as giving an overview of trends in state tax policy and the detailing the economic benefits of tax cuts.

Perhaps the biggest storyline of the 2014 legislative session is the prevalence of tax cuts in both red and blue states. New York and Rhode Island—two states with the highest corporate income taxes in the nation—both cut their corporate income tax rate significantly in 2014. Additionally, New York, Rhode Island, Minnesota and Maryland all raised their death tax baseline exemption to allow their citizens to keep more of their inherited business value or capital after their loved one’s passing. Moreover Midwestern “purple” states like Michigan, Indiana, Ohio, Wisconsin, Nebraska and Minnesota—states where democrats have wielded political power or been politically competitive in recent decades—cut taxes in 2014.

States that cut taxes put more purchasing power in the hands of their citizens instead of government. Businesses can expand operations, invest in research and development or increase wages. Families can live more comfortably, pay down debt or save for retirement or their children’s future college. In all of these states—particularly those states that reduced taxes on economically productive behavior through personal income taxes, corporate income taxes or business capital taxes—economic performance will likely enjoy an uptick. All 14 of these states did their taxpayers a major service in 2014.

Of the 14 states that cut taxes during the 2014 legislative year, many states were repeat tax cutters: Kansas, Nebraska, Wisconsin, Florida, Indiana and Ohio all significantly reduced taxes in both the 2013 and 2014 legislative sessions.

Nebraska’s Governor Dave Heineman—the executive of one of the 6 states that cut taxes in 2013 and 2014—noted that, “Nebraska’s economic strength begins with policies that create an environment where private sector job growth is increasing. Working with the Legislature, we modernized Nebraska’s economic incentive programs. We passed the two largest tax relief packages in the history of the state and we’ve balanced the state budget without raising taxes.”