California State of the State: A High Speed Train of Taxes and Spending

California Governor Jerry Brown boldly championed an unabashedly liberal agenda throughout his 16th—and final—State of the State address. The governor declared, “California is prospering,” a stark turnaround from the economic mayhem of the Great Recession and mortgage meltdown. He pointed to the budget surplus today vs the $27 billion deficit in 2011. He also boasted that “in just the last eight years alone, California’s personal income has grown $845 billion and 2.8 million new jobs have been created. Very few places in the world can match that record.” Unfortunately, the governor’s proposals threaten to exacerbate many of the economic ills ignored in his address.

Thanks to a booming national economy and a series of tax hikes, a budget surplus of $7.5 billion in fiscal year 2019 is in sight. This is big in absolute terms but represents less than four percent of the total proposed state funds budget for FY 2019. And this projected surplus is just a fraction of the $27 billion budget deficit (approximately 20 percent of the FY 2011 budget) faced following the Great Recession.

To his credit, the governor is proposing to save some of the surpluses rather than immediately spend it. But with the “rainy day fund” only estimated to top out at seven percent of the total budget even after this infusion, the state’s budget situation will still be in peril in the event of a slow-down in revenue growth. California is notorious for tax revenue volatility, particularly since income taxes fund 70 percent of the governor’s proposed budget; keep in mind, income tax collections plunged by 20 percent during the last recession.

In addition, despite allusions to past budget “cuts,” the state is on a long-term spending spree, with total state funds spending in the FY 2019 governor’s proposal an astounding 63 percent higher than FY 2010. Some may point to this jump as merely making up for the budget cuts in the wake of the Great Recession, so let’s look farther back. Since 2001, total state funds spending rose by 97 percent, far surpassing combined population growth (15 percent) plus inflation (39 percent) through this period. 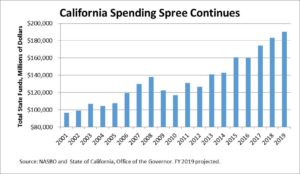 The governor applauded the latest in the series of tax hikes multiple tax hikes of the past legislative session on both fuel purchases and carbon emissions. This equals $6.7 billion in additional annual taxes, nearly $700 for a family of four on average.

Blame cannot be squarely placed on the Governor’s Democratic Party. Several Republican legislators joined nearly every Democrat in hiking the gas tax by 12 cents per gallon, hiking the diesel tax by 20 cents per gallon (in addition to raising the sales tax to 13 percent), and levying vehicle fees. This amounts to a whopping $52.4 billion over 10 years.

Likewise, the legislature also voted to extend the state’s cap-and-trade program. Although disagreement does exist as to whether all cap-and-trade programs are akin to a tax, the bottom line is this: The California carbon emissions program sucks more than 1.5 billion a year out of the private sector. With the margin of victory, just a single vote in both the Assembly and Senate, the decision of eight Republicans to join all but three Democrats proved pivotal.

Brown labeled the vote to raise the gas tax as “not easy, but it was essential.” He called these funds “absolutely necessary if we are going to maintain our roads and transit systems in good repair.” He even promised to do “everything in my power to defeat any repeal effort that may make it to the ballot.”

Sadly, the governor’s bullet train is consuming resources otherwise available for existing transit. In his own words, “I make no bones about it. I like trains and I like high-speed trains even better. So did the voters in 2008 when they approved the bond.” Due to cost-overruns and shoddy predictions, current costs for just 119 miles of track are estimated at $10.6 billion, far above the initial $6 billion estimate. The Los Angeles Times says this overrun on the Central Valley component “suggests the authority and its consultants have vastly underestimated the difficulties of buying land, obtaining environmental approvals, navigating through complex litigation and much else.” Even worse, the Times reports “the repayment of the existing bonds will cost about $18 billion in principal and interest over the next 30 years, money that is coming out of the state highway improvement fund.”

Despite the mounting evidence to the contrary, Brown claims his train is “cheaper and more convenient than expanding airports and building new freeways to meet the growing demand….” Of interesting note, the cost of the rail rivals the estimated costs of the deferred transportation infrastructure maintenance.

The governor seemed almost giddy with excitement at his soon to be announced “expenditure plan for the revenues that the cap-and-trade auctions have generated…Your renewing this [cap-and-trade] program on a bipartisan basis was a major achievement and will ensure that we will have substantial sums to invest in communities all across the state, both urban and agricultural.” In other words, the goal of cap-and-trade may be to save the world from rising tides; but it also doubles as a tool for politicians to forcibly transfer wealth produced by one group of residents to another more favored by the State.

Carbon taxation needlessly distorts energy markets, harms consumers, expands government bureaucracy, and has minimal (if any) effect on global climate change. Ultimately, the whole point of this tax is to make energy derived from fossil fuels so cost prohibitive that consumers begin to change their behavior, thereby reducing emissions.

As the ALEC Principles of Taxation state, “The proper function of taxation is to raise money for core functions of government, not to direct the behavior of citizens…” Government manipulation of energy markets artificially inflates the price of energy. This benefits politically-preferred forms of energy and a favored class of business interests.  And, politically preferred as they are, lifecycle analysis calls into question the extent of carbon-reducing advantages of some renewables. For instance, it can take two years of operation of most solar panels just to offset the carbon emitted during its manufacturing.

“Enlightened by top scientists,” the governor promised a plethora of economically meddlesome measures ranging from 50 percent renewable electricity “in just a few years” and more zero-emissions vehicle incentives. He encouraged Californians to “think of all the jobs” the “ambitious goal” of “five million zero-emission vehicles on the road by 2030” will create.

The Public Employees’ Pension Reform Act altered benefits for employees hired after January 1, 2013. But payout formulas for existing employees remained the same. Up until just a few weeks ago, existing court precedent known as the “California Rule” made it nearly impossible to change pension benefit for existing employees. Gov. Brown challenged this interpretation of the law and won. Using a risk-free rate of return, California’s per capita unfunded public pension liabilities are 12th highest in the nation, at more than $25,100. Further reforms will protect the interests of taxpayers and retirees.

Despite the seven percent estimated cost reduction stemming from the workers’ compensation reform of 2013, California’s system remains costlier than any other state at 3.24 percent of payroll, despite a seven percent estimated reduction in costs. For every $100 in costs an employer incurs on average nationally, that same employer pays $174 in California. Much of this is due to fraud. Trial lawyers benefit from this gravy train thanks to the legal fees “earned” and politicians certainly enjoy the pollical contributions from those trial lawyers. But honest workers, the truly injured and business owners are all harmed by this collusion. Real reform is needed.

The governor claims “public confidence has…been inspired” by this California-style bipartisanship; but the continued outflow of domestic residents tells another story. The fact is, more than 1.1 million people left California for other states from 2006-2015. For a married couple each earning $75,000 with you kids, simply relocating from Los Angeles to Phoenix means more than $3,300 in additional disposable income. With this in mind, it’s no surprise that from 1992-2016, an accumulated net $58.6 billion in income (as measured by the Internal Revenue Service) left California for other states. The outflow considered each of the four most recent years. The biggest beneficiaries of the Golden State exodus are Nevada, Arizona, and Texas, all lower taxed states.

The governor boasts that “whether it’s roads or trains or dams or renewable energy installations or zero-emission cars, California is setting the pace for America.” Given the admittedly dilapidated and outgrown condition of California’s infrastructure and the exorbitant energy prices paid by consumers thanks to the extreme environmental regulations in place, the rest of the nation may counter this claim.

Despite the lengthy economic recovery and the gusher of social services funding, California’s poverty rate is the highest in the nation. As Manhattan Institute scholar Kerry Jackson points out, “With 12 percent of the American population, [California] is home today to about one in three of the nation’s welfare recipients.” Government entities across the state dish out spending to the impoverished while at the same time enacting policies that block the poor from accumulating wealth—such as restrictive land use regulations forcing housing prices higher. Politicians receive accolades for “helping” the very people they suffocate with radical economic policies.

The annual Rich States, Poor States publication now ranks California 47th in economic outlook. Residents suffer from the highest personal income taxes in the nation, the 11th highest corporate income taxes, the fourth worst tort system, and the highest workers’ compensation costs. Thanks to decades of fiscal mismanagement, debt service eats up more than 9 percent of tax revenue, 10th worst in the nation. It’s time for a change. Unfortunately, the governor encouraged the trend toward ever-higher taxes and government control of the economy.