On Tuesday a ballot measure to raise income taxes on Coloradans to raise funds for increased education spending failed. In fact, the measure, Amendment 66, didn’t just fail–it went down in flames. The measure was defeated by a 30 point margin. This major defeat was in spite of the fact that the measure’s backers outspent the opponents by a large margin, raising $10 million to support the initiative, including a $1 million each from New York Mayor Michael Bloomberg and Bill and Melinda Gates. 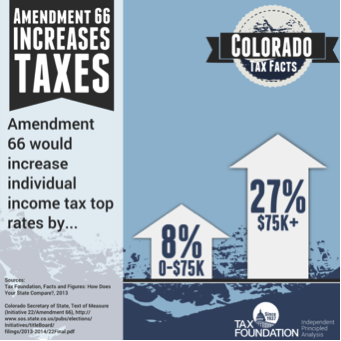 Amendment 66 would have eliminated Colorado’s flat rate income tax of 4.63 percent in favor of a new tiered income tax system that would tax income below $75,000 at 5 percent and income above that amount at 5.9 percent. This would have amounted to nearly $1 billion in new taxes on all Coloradans, and, most notably, this measure would have even increased taxes on low earners in addition to high earners.

Such a major tax increase on everyone in the state of Colorado clearly would have had a negative impact on the Colorado’s economic competitiveness. In an article from the Wall Street Journal on October 23, the editorial board cites ALEC’s Rich States, Poor States report in making this point:

“Colorado’s liberals may aspire to join the left coasts, but that won’t make the state any more competitive in its interior U.S. neighborhood, where states like Kansas and Oklahoma are cutting tax rates. High-tax states created one net new job for every four in states without an income tax from 2002-2012, according to a study for the American Legislative Exchange Council.”

The Colorado Springs Gazette editorial board also relied on data from ALEC’s Rich States, Poor States report to make their final pitch for Coloradans to vote NO on amendment 66 the day before the election. Fortunately, Colorado voters weren’t fooled by proponents of high taxes and instead chose to vote for economic growth on Tuesday.