In 2016, the Connecticut Superior Court held that the state failed to uphold its constitutional duty to provide adequate education to children in certain school districts.[i] The court’s decision was neither unique nor unexpected. Over the past decade, dozens of court decisions have rendered “inadequate provision of education” verdicts in states across America. However, unlike the Connecticut case, most of the decisions have focused on requiring increased education funding as a means to improving education outcomes. In Connecticut, education spending per student across the state is high, even in districts with high rates of poverty.

The combination of quality teachers instructing engaged students is one way to yield desirable academic outcomes. But simply providing additional school funding does not magically create better teachers or more serious students. For example, Washington, D.C. spends more than twice the national average per student[ii] and yet ranks as one of the worst performing school districts in the country. Connecticut ranks fifth highest in expenditures per student nationally as of 2014;[iii] even the schools which rank near the bottom in per-student spending compared with other Connecticut schools spend approximately 20 percent higher than the national average.

In Table 1 displays the correlation between high school graduation rates and per-pupil expenditures, using the Connecticut Department of Education “EduSight” data. The logarithmic relationship between spending and outcomes is reminiscent of other studies.[iv] For instance, Emiliana Vegas and Chelsea Coffin’s study of per-student expenditures and PISA math scores found, “when education systems spend above $8,000, the association between student learning and per-student spending is no longer statistically significant.”[v] The findings of Vegas and Coffin are visualized in Table 2, below and right, for comparison. In 2016, the American Legislative Exchange Council (ALEC) issued a “State Factor, The Pernicious Myth of the Underfunded American School System,” which compares education funding and outcomes over time and finds a similar lack of correlation. 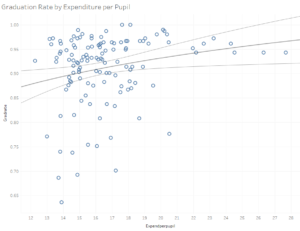 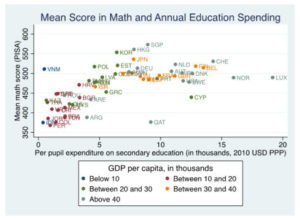 Another factor which correlates with student outcomes is teacher quality. However, the challenges involved in quantifying teachers’ skills make it unwise to simply attribute the dismal student outcomes alongside elevated expenditures to unsatisfactory teacher performance. But experience does not support the theory that advanced degrees and certifications of teaching faculty necessarily produce improved student outcomes.[vi] Compounding the problem, the generation of new teacher performance metrics faces significant political opposition.[vii] 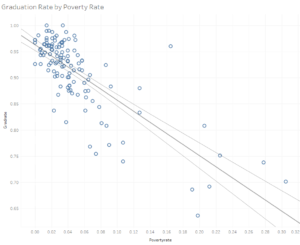 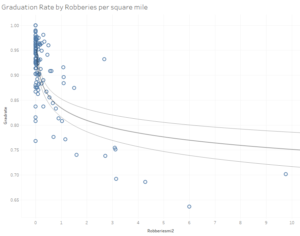 There is a caveat to the practically insignificant correlation between per pupil expenditure and student outcomes. Per pupil expenditure does not control for the fact that non-teaching staff, administration, has grown far faster than education expenses. Since 1970, for every new dollar spent on a teacher, two dollars were spent on administration, see Table 6. Thus, higher spending per pupil may not have a one-to-one correlation with spending on the classroom.

[xi] Furthermore, our model assumes that teacher quality in Connecticut is high and homogenous. While teacher quality is difficult to quantify, competition aggregates information from each person in the market and consumption tends to gravitate toward the higher product good and assuming equal cost. Charter schools, such as the Success Academy in New York City has had success in spite of high rates of poverty and equal costs.[xii] This shows the charter system has likely found a way to improve teacher quality, through selection or training, even though it is difficult to quantify.

The battle over the Equalized Cost Sharing formula, a major sticking point in the ongoing budget battle in Connecticut,[xiii] is focused on the wrong solution. The solution is an expansion of the economic opportunities that can help eradicate the one factor that is most closely linked to dismal educational outcomes: pervasive poverty. Simply funneling more dollars to schools avoids the challenging work of lifting Connecticut’s economic outlook out of the bottom five.[xiv]

*(N = 126 school districts, districts which did not report graduation rates were omitted)