Gubernatorial Elections and the Message on Taxes

While there is plenty to analyze from the elections as a whole, one of the most important lessons that we can glean from the 2014 mid-terms is on taxes. The message sent this election cycle to the nation’s governors is unmistakable. Governors who enacted bold tax reforms were reelected, even when facing daunting odds. Many governors who raised taxes, or even showed support for increased taxes, were ousted by voters. 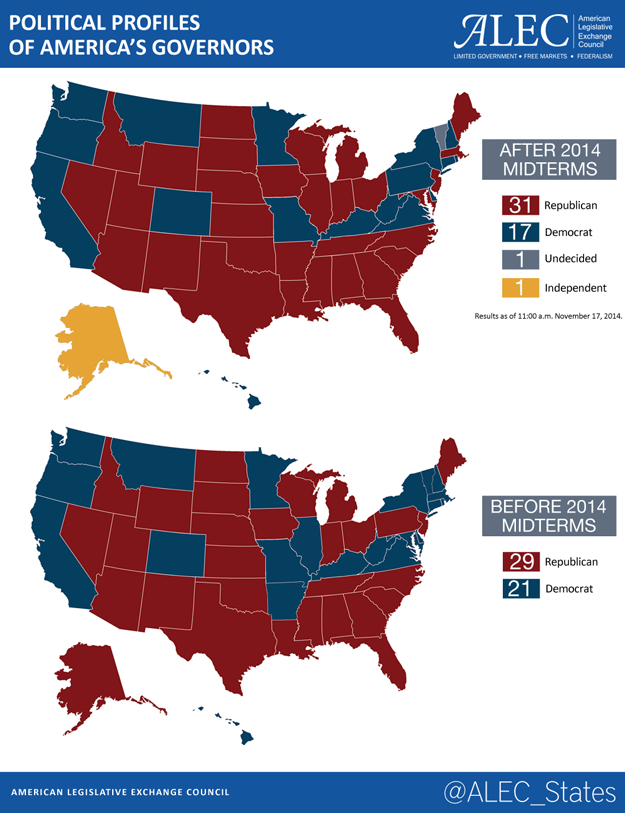 Perhaps the most dramatic demonstration of this point was the reelection of Governor Sam Brownback in Kansas. In 2012, Governor Brownback signed significant tax cuts into law that were aimed at decreasing the overall tax burden on Kansas residents and especially jumpstarting small business. The main planks of the tax plan included the following:

Despite a massive misinformation campaign about the supposed “destructive” nature of the Kansas tax cuts, voters were clear on what they wanted: less taxes and more economic growth.

Other governors that pursued significant tax cuts were also reelected. Governor Paul LePaige of Maine, Governor Rick Snyder of Michigan and Governor John Kasich of Ohio all won their bids for reelection. Governor Scott Walker of Wisconsin cut taxes several years in row and won his third statewide election in the state.

Arizona voters sent State Treasurer and businessman Doug Ducey to the governor’s mansion by a margin of more than 12 percent. Ducey had campaigned on cutting the states personal and corporate income taxes and even saying that he wanted to get the state’s 4.54 percent income tax rate “as close to zero as possible.” The Arizona economy was a central part of his campaign and voters decisively approved of his low tax message.

Nevada voters soundly defeated a ballot measure to implement a 2 percent margin tax on all business revenue by voting it down with nearly 80 percent voting against and only 20 percent voting in favor. Governor Sandoval, who was quoted as saying that the margin tax would be a “fatal blow” to Nevada’s economy, was reelected with more than 70 percent of the vote.

In North Carolina, where Governor Pat McCrory was not up for reelection, an important message from voters was delivered on taxes. Senator-elect Thom Tillis was the Speaker of House when North Carolina’s historic tax reforms were passed. Incumbent Sen. Kay Hagan made the state’s tax cuts a major campaign issue and attempted to frame the election as a referendum on the Legislature’s tax cuts. Along with Kansas, North Carolina passed some of the boldest and most significant tax reform at the state level in the last decade. The North Carolina reforms included:

In all, the reform bill cuts taxes more than $500 million in the first two years alone, and more than $650 million a year by the 2017-2018 fiscal year (see revenue estimates here).

In addition to the reelection of multiple governors supporting bold tax reforms, governors that hiked taxes (or even supported them) were defeated in several states. In traditionally blue Massachusetts voters elected Charlie Baker over Martha Coakley and simultaneously voted to stop automatic gas tax increases by approving a ballot initiative to end the practice.

In one of the biggest upsets of the night, Larry Hogan beat Lieutenant Governor Anthony Brown in the Maryland Gubernatorial race. Brown had served under Governor Martin O’Malley. Governor O’Malley had raised taxes more 40 times since he took office, totaling $9.5 billion in new or higher taxes for Maryland residents through fiscal year 2014. Hogan campaigned on lowering taxes and making it easier to start and grow businesses in the state.

Although taxes were certainly not the only issue that brought voters to the polls last week, the results show a clear message. When it comes to taxes, people are tired of paying an ever increasing amount and sacrificing higher economic growth. As Rich States, Poor States: ALEC-Laffer State Economic Competitiveness Index demonstrates, the economic evidence is clear that states that generally have lower taxes have higher rates of economic growth. This election, people voted against higher taxes and for economic growth.