Last year at Halloween, we told the gruesome tale of tax carve-outs. It all started when our social media guru, Jordan, asked for some statistics on the extent of total state tax carve-outs. He wanted to make a meme for this great image you see here, adding in some numbers for policy context.

I thought his request would be simple. I was horrified to learn that it was not easy. There were no measures of the extent of state carve-outs across all 50 states. I was absolutely mortified and petrified.

A year later, we have tried to fight back against the evil specter of economically inefficient tax carve-outs and their lack of transparency. We recently published “The Unseen Costs of Tax Cronyism: Favoritism and Foregone Growth,” which defines tax cronyism, measures the carve-outs in the tax code across all 50 states and provides the intellectual ammunition for why states should end tax cronyism. 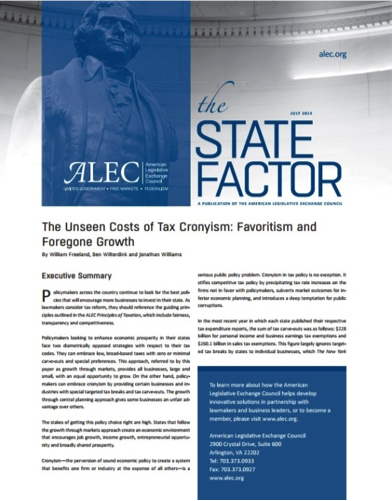 We found $228 billion in exemptions for personal income and business earnings and $260.1 billion in sales tax exemptions (pages 6-9 of the report have the details by state), based on the most recent year of state tax expenditure reports in each state.

The most terrifying thing about that figure might not be the size but instead, what it doesn’t include. Five states don’t even issue a tax expenditure report (AL, AK, NV, SD, and WY). Seven more issue reports either infrequently or with grossly incomplete information (AR, HI, IA, MO, ND, SC, UT, and VA). Only 24 of the 46 states with sales taxes measured the exemption of services from their sales tax base. Only 16 states included a policy rationale for each tax expenditure. Only 6 states performed a performance evaluation for the given state’s tax expenditures. Beyond those topline figures, many states report only on credits and not deductions and exemptions, exclude major tax categories and have high cash value thresholds under which they don’t report tax credits. Tax carve-outs continue to be a proverbial black box across the states, which is quite terrifying.

The Mercatus Center recently organized and published Good Jobs First data on specific subsidies to companies, which provides an alternate depiction of this data. As Mercatus notes, Good Jobs First’s data entails problems due to the fact that they identify tax provisions that are uncontroversially not cronyism as business subsides (these provisions actually attempt to properly structure the tax base), hence they do over-counts the extent of cronyism based on what is reported. They also exclude many tax carve-outs that don’t go directly to business but do create competitive unbalances and injustices, and therefore also should be considered tax cronyism. But given the high level of poor reporting and lack of good alternatives (outside of our figure published in “The Unseen Costs of Tax Cronyism: Favoritism and Foregone Growth”), the data provides a good baseline estimation. The picture below illustrates their results: 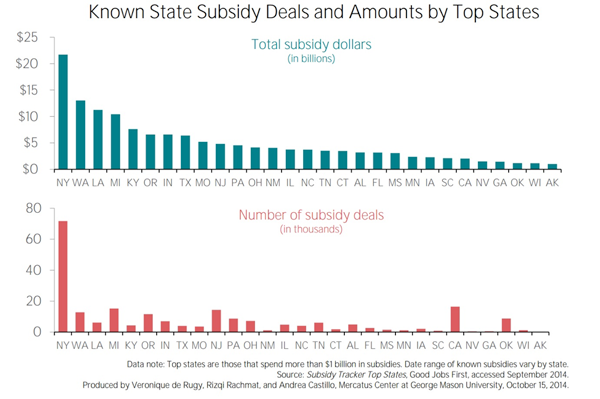 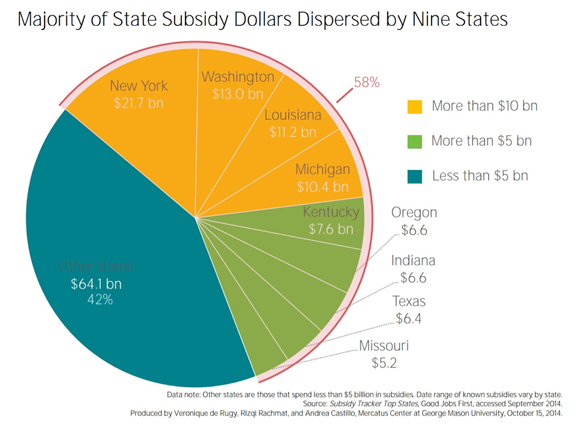 As we note in our recent paper on tax cronyism, cronyism is a poor alternative to sound, pro-growth tax policy. In short, cronyism represents economic planning (the “Growth through Central Planning” model) whereas sound tax policy amounts to utilizing markets (the “Growth through Markets” model). States should reject the ghoulish specter of tax cronyism—along with tax cronyism’s associated economic distortions, competitive unbalancing of markets, higher taxes on the unfavored businesses and temptation for public corruption—and pick sound, free market tax policy characterized by low rates, broad bases and neutrality to all taxpayers.