Myth of the Day: Lower Tax Rates are Bad for the Economy

Our blog post on Myth #1 explained why it is untrue to assume that increased government spending (economic stimulus proposals in particular) leads to increased economic growth.  Today’s myth strikes at a related assumption: lower tax rates are bad for the economy in a recession and always lead to lower revenues. In Tax Myths Debunked, co-authors Dr. Randall Pozdena and Dr. Eric Fruits show that this conclusion is simply not accurate.

Dr. Fruits and Dr. Pozdena begin their analysis by posing a poignant question in response to concerns about how a tax cut might affect government revenue collected: “Shouldn’t policymakers ultimately be more interested in maximizing total private income?” They argue persuasively that the fundamental goal of tax policy should not be to collect as much revenue from citizens as possible but instead, to provide for efficient government while fostering economic growth and putting more dollars in the hands of citizens. Fruits and Pozdena go on to say, “Advocates of high tax rates cannot have it both ways. If they levy high tax rates and are successful in gaining higher revenues, then they are condemning the economy to be smaller…In other words, shifting resources to the government sector does not dynamically improve the income performance of the economy; it degrades it.”

The authors then go on to discuss the relationship between tax rates and tax revenue, citing ALEC scholar Dr. Arthur Laffer who is famous for the Laffer Curve, which demonstrates that after reaching a certain level of marginal tax rates, revenues actually begin to fall off.  In the extreme example, a state would receive the same amount of tax revenue with a 100 percent rate as with a 0 percent rate – not much.

This phenomenon is not strictly theoretical.  A 60-year review of federal tax revenues as a share of GDP, compared to the highest marginal tax rate for each year, can be found in Tax Myths Debunked. The review of the data demonstrates, despite widely changing tax policies over the years, the federal government has never collected more total annual revenue as a percentage of GDP than roughly 19.5 percent (see Figure 6 from Tax Myths Debunked below). 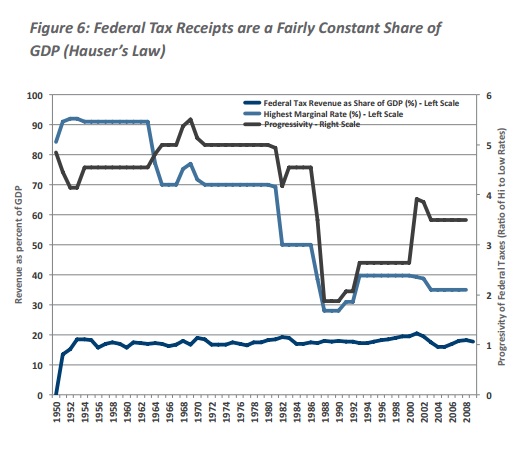 This reality, called Hauser’s Law, also holds true at the state level, which similarly has never collected more revenue in total than roughly 5 percent of GDP (see Figure 7 below). 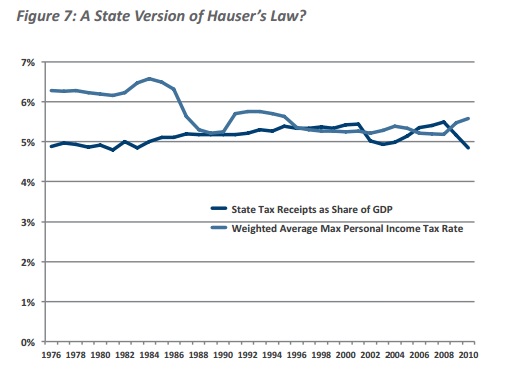 The scholarly work of Tax Myths Debunked illustrates that lower tax rates are better for the economy because citizens have the best incentives and resources to work hard, produce, innovate, and grow wealth.

To read more about the relationship between stimulus spending and its effect on an economy during a recession, check out Tax Myths Debunked. Co-authors Dr. Pozdena and Dr. Fruits use overwhelming evidence to confirm that the path to prosperity is in free-market, pro-growth policies. The report is available for free download at www.alec.org/tax-myths-debunked.