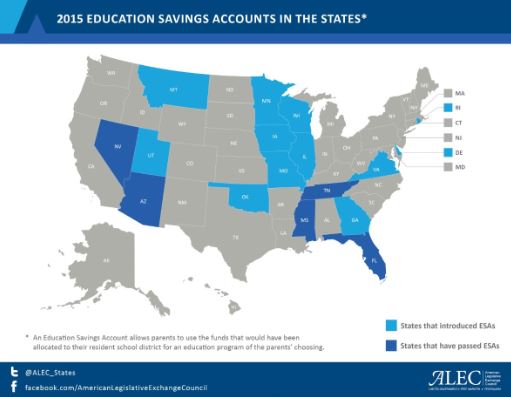 Nevada has become the first state in the nation to provide parents uncompromised educational freedom through the passage of Universal Education Savings Accounts (ESA). Nevada’s Senate Bill 302 raises the bar previously set by Arizona, Tennessee, Mississippi and Florida, whose legislation stipulates eligibility restrictions and provides all parents control over their child’s education.

Senate Bill 302 allows parents with a child enrolled in a Nevada public school, including charter schools, the option to remove their child and take their child’s, not the government’s, funding with them. Under SB 302, a family with a household income that is below 185 percent of the federal poverty level would receive funding equivalent to the state’s full, average per-student spending. Students with disabilities would also receive a full share of state funding. All other children would be eligible for 90 percent of average per-student spending. SB 302 allows parents to use their child’s savings account money on tutoring, therapy, textbooks, digital tools, Advanced Placement (AP) courses or a myriad of blended learning opportunities.

In 2013, state legislators across the nation sought policies that provided school choice but also made parents the ultimate decision makers. Members of the American Legislative Exchange Council (ALEC) put their heads together to find a solution. At an ALEC meeting in December 2013, ALEC legislator members determined that parents should be able to use the funds that would have been allocated to their child at their resident school district for an education program of the parent’s choosing and adopted The Educational Savings Account Act. Consequently, Arizona implemented the first Education Savings Account (ESA); Florida, Tennessee and Mississippi soon followed.

ESAs play an important, but often understated, role in school accountability. The very term ‘school accountability’ has become such so ghastly and political, policy discussions often determine it unworthy of sincere and nonpartisan discourse. Despite the importance of effective and efficient schools, ‘school accountability’ can provoke rancor and lead to the blame-game. However, blaming schools does not raise student performance or achievement. With the passage of SB 302, blaming schools will be rhetoric of the past. Schools will naturally be held accountable when their classrooms are full of empty desks.