Unfortunately, new taxes will continue to drive residents to “vote with their feet” out of New Jersey, a state that has suffered a net loss of more than 500,000 residents to other states over the past decade alone.

An important economic insight for anyone in policy and government is that taxes harm economic growth and therefore reduce revenue collections from expectations due to the change in the behavior of individuals – such as the 500,000 who have left New Jersey over the last decade. This insight was made famous by Dr. Arthur B. Laffer and is illustrated in the graph below. The Laffer Curve demonstrates that at a certain point, tax rates become prohibitive and affect the behavior of businesses and individuals. 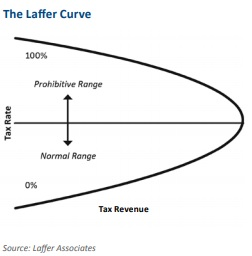 For the Garden State, these indicators are highlighted in the ALEC annual report Rich States, Poor States. In the latest edition of the report, New Jersey ranked 48th in economic outlook and 45th in economic performance. During the pre-COVID economic expansion nationally, New Jersey had some of the highest tax rates in the country, low GDP growth (43rd in the nation), high net-outmigration, and low employment growth.

This was all before New Jersey passed their FY 2021 budget that increased tax burdens and added $4.5 billion in new debt. Using the Rich States, Poor States “Adjust Policies” tool, New Jersey’s Economic Outlook would drop to 49th in the country as a result of the new budget.

Last year, there was a discussion by some in New Jersey to reform the state’s pension and OPEB systems, but even the proposal to simply create a fiscal review commission was vetoed by the governor.  New Jersey needs serious tax and fiscal reforms that reverse uncompetitive policies and the economic harm they have caused. Unfortunately, as Assemblyman Hal Wirths put it, “with $703 million of increased taxes, $1.7 billion of spending hikes and $4.5 billion of new borrowing, this budget does less for more.”