This article originally appeared in the March 23, 2020 edition of Tax Notes State.

Upon hearing the term “OPEB,” most people look bewildered, not knowing that OPEB, short for other post-employment benefits, is a trillion-dollar acronym.

In addition to the nearly $5 trillion in pension liabilities, states owe just over $1 trillion in OPEB benefit liabilities to retired public employees, which include health insurance, life insurance, Medicare supplemental insurance and other types of benefits. These benefits are offered by nearly every state to retired government employees. Our report finds that the states with the highest tax rates (i.e. California, New York, Vermont, and Illinois) have some of the largest unfunded OPEB liabilities. The problem arises from poor management and spending practices on part of the state governments. If OPEB reform does not happen soon, these unfunded liabilities could mean higher taxes to pay growing unfunded liabilities.

Like pensions, for most state plans OPEB benefits are dispersed through a defined benefit structure where state government employers and employees contribute to funds which pay for benefits while an employee is working. Then, upon retirement, the employee is eligible to receive these benefits. OPEB plans cover non-pension benefits such as retiree health coverage or prescription drug plans. Many of these plans (like retiree healthcare) work in tandem with Medicare.[2]

In addition, 57 of the 132 OPEB plans examined in our report were “pay-as-you-go” plans. A “pay-as-you-go” defined benefit plan is a plan that has less than a 1% funding ratio and often does not have assets that meet the requirements of the Governmental Accounting Standards Board (GASB) requirements for OPEB assets requiring reporting.[4] Quite often, unfunded liabilities accumulate rapidly for “pay-as-you-go” plans because employers – in this case state governments –do not make the necessary annual contributions (known as their annual required contribution or ARC payment) to cover expenses.[5]

The Rapid Growth of Unfunded Liabilities

To highlight how rapidly unfunded liabilities can pile up, the ALEC report also revealed the 10 states with the fastest growing unfunded OPEB liabilities from FY 2016-2017. 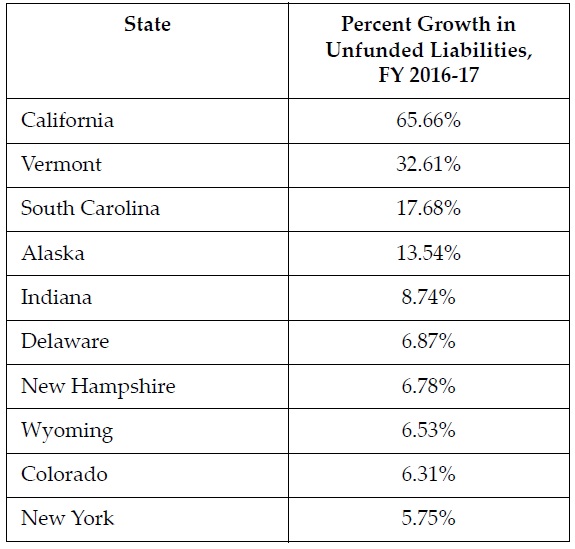 Of these 10 states, not one made its full ARC payment. Only Indiana (94.79%) came close to paying the full ARC. The rest of the states paid less than 75% of the annual required contribution. Half of these states – Colorado, Indiana, New Hampshire, New York, and Wyoming – had plans that were “pay-as-you-go.” Among these states, Indiana has some of the lowest unfunded liabilities in the country ($549.8 million) and is in much better fiscal shape than most of the other states on this list.[7] The purpose of this table is to show how rapidly unfunded liabilities can grow in a year’s time and a better funded OPEB plan can easily go into a negative direction.[8]

Not only did California have the highest total unfunded OPEB liabilities, the Golden State also had the fastest growing unfunded OPEB liabilities from FY 2016-2017. The Golden State’s actuarial funding ratio was 0.35% (48th in the country) with $166.5 billion in unfunded liabilities in FY 2017 (roughly $4,213.14 per resident). This is a significant jump from California’s $100.5 billion in unfunded liabilities for FY 2016, driven by the more state employees retiring earlier than assumed, increases in life expectancy, and increases in expected healthcare cost trends.[9]

Since 2007, the California Employers’ Retiree Benefit Trust has provided OPEB benefits through a state substantive plan (where all retired state employees are covered under one OPEB plan). The CERBT paid for OPEB liabilities on a pay-as-you-go basis but started prefunding retiree health care benefits in January 2010. Despite prefunding the state substantive plan, California’s asset values have fallen short of liabilities by the ALEC’s standards, the measurements of independent auditors, and the state’s own financial reports.

Vermont, which had the second fastest growing OPEB liabilities, was certainly not helped by its Retired Teachers’ Health and Medical Benefits (RTHMB) Fund’s negative asset valuation of -$26,657,000. The RTHMB was created on July 1, 2014 as a health care fund for teachers that would be separate from the State Teachers’ Retirement System. In 2015, rather than increasing employee contributions, the state treasurer authorized borrowing state funds up to $30 million to finance funding shortfalls.[10]

These borrowed funds must now be paid back to the state by the end of FY 2023. In other words, the RTHMB is funding retired teacher health care on borrowed money. The residents of Vermont will have to pay the costs of the unfunded liabilities and repay the money borrowed to fund the RTHMB.[11]

Not pre-funding OPEB plans, coupled with rising healthcare costs over the past decade, has caused unfunded OPEB liabilities to soar past the $1 trillion mark. Unlike pensions, however, the payout of most OPEB plans is not guaranteed. If a recession hits or a budget crisis occurs, OPEB plans will take cuts or could even be eliminated entirely.

The Effect on State Budgets

As spending was scrutinized, state policymakers ended the state’s OPEB health insurance (among other budget cuts). Unfunded liabilities dropped 97% to $9.7 million in FY 2016. However, retirees can enroll in the state employee health insurance plan with active employees. Kansas had just under $285,000 in unfunded OPEB liabilities in FY 2017 (3rd best in the country).[15] Despite closing the OPEB plan, Kansas must still pay a portion of its unfunded OPEB liabilities. States cannot simply wait for a budget crisis to occur and hope to default on its unfunded liabilities.

Among the 50 states, Nebraska and South Dakota serve as models for OPEB reform. Nebraska and South Dakota ranked as the states with zero unfunded liabilities, or a 100% funding ratio. Plan structures in both states now offer the ability for current employees and retirees to purchase a health savings accounts (HSA), where employees and retirees make pre-tax contributions, and state government employers match contributions up to a certain amount. In addition, employees age 55 or older can make tax free “catch-up” contributions that are $1,000 larger than the IRS allowable annual amounts of $3,550 for individuals and $7,100 for families using an HSA.[16] [17]

In the Buckeye State, the Ohio Public Employee Retirement System (OPERS) recently decided to make changes to retiree healthcare benefit provisions. These changes (which come into effect January 1, 2022) include discontinuing the current plan sponsored by OPERS, freezing cost-of-living adjustments for retirees, and reducing the monthly allowance provided to Medicare-eligible retirees. The new benefit provisions will, however, provide a monthly stiped to retirees not yet eligible for Medicare to help offset their healthcare coverage costs.[19] OPERS trustees hope that these changes will help improve the solvency of the Ohio’s OPEB fund, which had $23.8 billion in unfunded liabilities in FY 2017 (ranked 41st in the ALEC report for total unfunded liabilities).[20] If successful, these reforms will help sustain OPERS funding levels years to come.