The most recent edition of Unaccountable, Unaffordable, the ALEC Center for State Fiscal Reform uncovered a disturbing trend in pension management. States that are fiscally worse off appear to be unwilling to take even the simplest steps toward better pension management.

Public pension mismanagement is a nearly ubiquitous tragedy in the United States. Unaccountable, Unaffordable controls for some of the differences between pension plans by re-discounting liabilities. Discount rates are supposed to reflect the risk of the liability, not the historical rates of return on assets, given that states cannot default, the study uses a risk-free rate. Using a risk-free discount rate, which reflects the guaranteed nature of state obligations, all 50 states have net funding ratios well below the 80 percent minimum.  Wisconsin claimed the best funding ratio with 61 percent, whereas Connecticut lagged far behind the pack at 19 percent.

One of the most striking trends across states was the decision to reduce discount rates relative to the previous year. Common sense suggests that if you aim for a rate of return and fall short, you should be more willing to reduce your assumed rate of return than those who succeeded. However, we see the opposite behavior among pension managers. This is because the political and individual incentives inherent to defined-benefit management push pension managers, politicians and public employee union representatives to make poor actuarial assumptions. 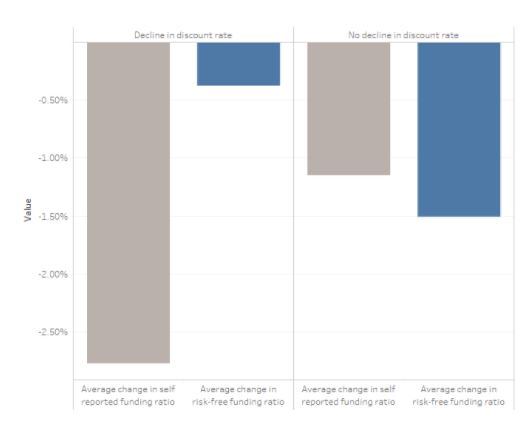 From a financial perspective, this does not make sense. It makes perfect sense from a political perspective. Treasury offices and fund managers alike are aware of how their fund will perform relative to the rest of the market toward the end of the year. Funds which outperform the average will receive positive press which, in turn, provides the political cover necessary to adopt a lower assumed rate of return— which reduces their self-reported funding ratio.

This may contribute to the negative correlation between funding ratios and assumed rates of return, which should be a positive correlation. In theory, a pay-as-you-go pension plan, a pension plan which is zero percent funded, should use a lower assumed rate of return as it has no long-term, higher interest investments. As a fund gains more pre-funded assets, managers can use a higher assumed rate of return, as they can invest in higher yield assets and take more risks. Much like the year to year change in discount rates, the reality defies theory. 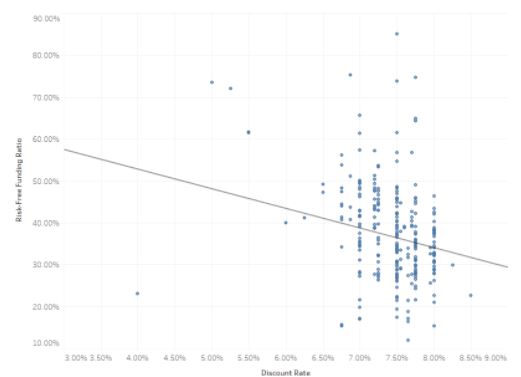 What emerges from the data is the inverse of what we would expect. Excluding plans with less than 10 percent assets to liabilities under the assumption that they are pay-as-you-go plans, there is a significant negative correlation (P < 0.0001) between discount rates and risk-free funding ratios. It is likely that having an unrealistically high assumed rate of return leads to underfunding through an underestimation of the annual required contribution. It is also possible that underperformance reduces political capital, discouraging fund managers from making the difficult decision of lower assumed rates of return.

The pension crisis has been understood since the 1980s and yet simple mistakes continue to be made in nearly every state. Unfortunately, the actors with the most influence over pension funds have the weakest incentives to properly manage them. The most effective way to protect taxpayers and state employees alike is to remove the state’s ability to underfund retiree benefits by switching to defined-contribution pension plans.