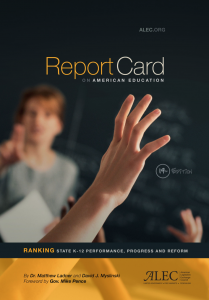 Its findings highlight an old fact: more spending does not translate into better outcomes for K-12 students.

States spend an average of $11,153 per pupil on education. The District of Columbia topped the list at $29,029 per student – nearly triple the national average – yet achieved only mediocre results. The District placed 22nd among states in national testing results, achieved a graduation rate of less than 60 percent (20 percent lower than the national average), and scored a B- on the ALEC scorecard. The scorecard looks at factors such as teacher retention policies and the regulatory burden placed on alternative methods of education, including private and virtual options.

Around the country, the findings led to a consistent conclusion. In the Midwest, North Dakota spent slightly less than Minnesota to educate its students – $13,118 versus $13,464 – but was decimated in testing results. Minnesota placed 13th in National Assessment of Educational Progress (NAEP) testing results – and scored a C+ on the ALEC scorecard – while North Dakota placed 38th and scored a D. In the South, Florida spent $10,031 per student versus Louisiana’s $12,054, while they placed 10th and 48th, respectively, and attained ALEC grades of B and B-.

If differences in per pupil spending did not produce distinctive outcomes, what made the difference? The answer rests largely in school choice policies. Where Minnesota led the way in the formation of charter schools in 1991, North Dakota is one of only eight states not to allow charter schools today, instead forcing students into a one-(failing) size-fits-all education system.

Indiana obtained a grade of B+ on the report card, the highest grade of any state, and placed 4th on NAEP testing results. With an independent board in place for authorizing charter schools, Indiana earned an A for charter school policy. The state also received an A for its private school choice policies thanks to a new program that allows students from low income families to leave failing public schools in favor of alternative private schools. At an average per pupil cost of $11,583, Indiana managed to achieve superior results at a cost below what many other states spent to underperform.

The ALEC report card suggests that school choice is correlative with improved student performance. On the other hand, it also suggests that there is no consistent causal relationship between increased spending and student performance. That helps to explain how federal inflation-adjusted spending on education could have tripled over the last four decades while outcomes remained static (or worsened in the case of science scores), and it should inspire lawmakers to re-evaluate how they approach education policy.