State of the Union Tax Proposal Would Hurt Middle Class 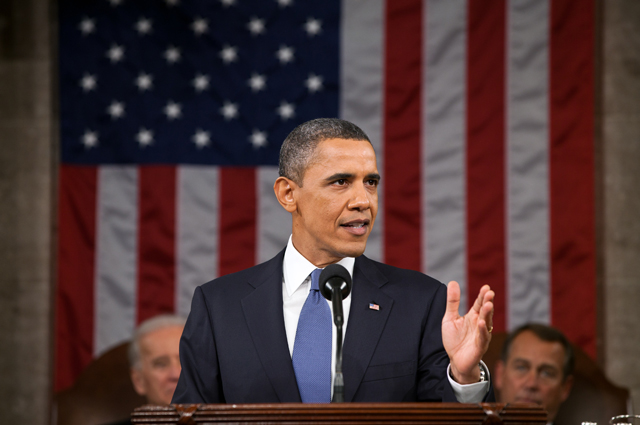 During his seventh State of the Union Address, President Obama outlined his vision for an economic plan he claims will help the middle class. And for the seventh year in a row, President Obama has advocated for tax increases that will likely end up hurting those that he claims to help.

The weekend before the annual address, the president released the full details of his tax plan, but the major components include raising the capital gains tax, increasing the death tax and taxing 529 college savings accounts, which represent a combined tax increase of $320 billion over ten years. These tax increases would, at least in part, be used to pay for new tax credits aimed at the middle class.

The most egregious piece of the president’s economic plan is his proposed hike in the capital gains tax, under which most investment income is taxed. The tax is assessed when an individual holds an asset for a year or longer (long-term capital gains) and sells it for more than it cost to buy it. If the asset is held for less than a year, it will not be taxed under the capital gains rate, but instead as regular income. When President Obama took office, the capital gains tax rate was 15 percent. In January of 2013, the fiscal cliff agreement increased the capital gains rate to 20 percent. Then, a 3.8 percent surtax on investment income was included as part of Obamacare. Now President Obama proposes to increase it to a top rate of 28 percent, nearly double what the rate was when he took office.

In a dynamic analysis of the effects of the president’s proposed capital gains tax increase, the Tax Foundation found that the overall U.S. gross domestic product (GDP) would be 0.8 percent less than it would be without the tax increase. While this may not sound like much, it is likely to result in a loss of about $461 for families earning between $50,000 and $75,000. Additionally, it would likely result in a net loss of about $12 billion in federal revenues as a result of a smaller economy and decreased investment.

This Laffer Curve effect is well known on the state level. From 2001 to 2011, the nine states with no personal income tax actually grew revenue collections by 82 percent, while the nine states with the highest personal income taxes grew revenues by 54.3 percent. Because of these detrimental effects on economic growth, states are moving to end taxes on investment income altogether. In 2015 Tennessee is leading the charge with proposals to end the “Hall Tax,” which is the state tax on capital gains income. Ultimately, a capital gains tax increase means less money for both the middle class and the treasury.

The “stepped-up basis” provision is designed to compensate for the fact that an entire estate above $5.25 million is hit with a death tax of 40 percent. By increasing the tax on accrued capital in the form of estates, the president proposes making it even more difficult and expensive to save and pass on capital. By making it more expensive to save and accrue capital, it becomes more difficult to keep family businesses together and to use that capital for private investment—again contributing to less economic growth.

As with countless other taxes, the states are leading the way on death taxes as well. In fact, only 19 states still levy death taxes at all. In the past few years, Ohio, Indiana and North Carolina have all eliminated their death taxes completely.

This phenomena is not only happening in traditionally red states. In just the past legislative session, the traditionally blue states of New York, Rhode Island, Maryland and Minnesota all enacted tax reductions to their death taxes. The move to increase death taxes on the federal level is out of step with what most Americans want, as evidenced by recent actions on the state level.

The last economically damaging proposal by President Obama includes taxing 529 college saving accounts. After-tax income can be deposited into a 529 account, where it is allowed to grow tax-free and withdrawn with no tax penalty if it is used to pay for qualifying college expenses, such as tuition. By taxing these accounts they become a far less attractive option to save for college. There are currently about 11.8 million 529 accounts with an average asset value of about $20,671. These accounts are mainly used by hardworking families attempting to save for college. By proposing to tax these accounts, President Obama is once again breaking his pledge not to raise taxes on the middle class and would make it more difficult to afford perpetually increasing college costs.

The overwhelming majority of economic evidence clearly demonstrates that tax increases, especially on capital and income, are damaging to economic growth. The states realize this, and in 2014, 14 states enacted net tax reductions. The 2014 midterm elections swept in governors and state legislators who promised not to raise taxes.

By proposing massive tax increases and hindering economic freedom, President Obama has demonstrated that he is less interested in actually helping the middle class and more interested in redistributing income. The states are leading the way on economic growth and job creation, especially those that embrace the powerful impacts that result from letting taxpayers keep more of their own income. The president should take his cues from what works in the real world and look to the states that respect the taxpayers by achieving higher rates of efficiency and economic growth.

An economic proposal focused on maximizing government efficiency and economic growth, and thereby protecting hardworking taxpayers (and everyone), would look very different than the $320 billion tax increase that was actually proposed.