Myth of the Day: Increased government spending stimulates the economy during recessions

As state legislatures consider fundamental tax reform this session, ALEC’s Center for State Fiscal Reform recently released Tax Myths Debunked, a study that clarifies seven main misconceptions about tax policy. Co-authors Dr. Pozdena, former vice president of research at the Federal Reserve Bank of San Francisco, and Dr. Fruits use overwhelming evidence to confirm that the path to prosperity is in free-market, pro-growth policies. Over the coming days on American Legislator, we’ll explore each of the seven pervasive tax myths.

This common misconception has led to the spending of tax dollars at times when the government can least afford it.  A recent example of public policy based on this misunderstanding was the stimulus package of $831 billion, known as the American Recovery and Reinvestment Act and passed in February 2009. In fact, by the Obama administration’s own estimates, the loss of jobs with the “stimulus” plan was far greater than it would have been if the government had done nothing (chart from the Cato Institute’s Dan Mitchell). 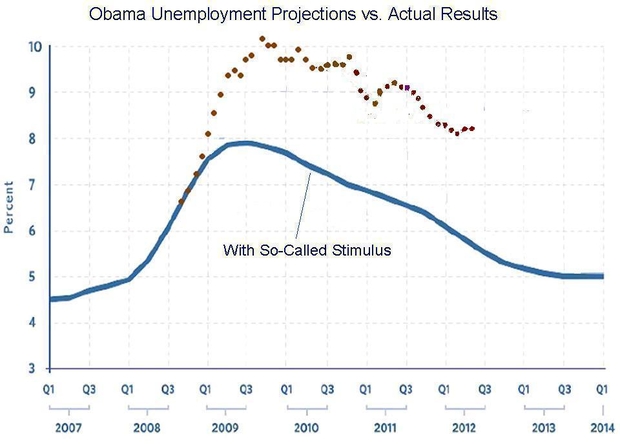 The authors of Tax Myths Debunked compare the logic of thinking stimulus spending can boost a slow economy to “trying to overcome a hangover by drinking even more.” The authors point out that the stimulus takes resources from the private sector and redirects them to the public sector, thereby perpetuating recession. Moreover, the authors point out, “Greater public spending today means higher taxes at some point down the line. The result is that the private sector reduces its activity in anticipation of having to bear future burdens of taxation or has less to save and invest due to current taxation.” Worse still, this sudden glut of public spending is often spent in a wasteful, inefficient manner, and can even lead to widespread cronyism.

Dr. Fruits and Dr. Pozdena analyze recent census and IRS data, as well as summarizing a wide body of scholarly research, and demonstrate how and why this prevalent misunderstanding is false. National, cross-country, and state-level studies  demonstrate that high levels of government spending results in less economic growth. In reality, keeping taxation low, and providing for hospitable and stable business environment are the most important steps a government can take to growing the economy and creating jobs.

To read more about the relationship between stimulus spending and the economy during a recession, download Tax Myths Debunked.  Continue to check  the American Legislator for more updates on the tax myths series.