While certainly not the only factor affecting whether Americans move from one state to another, taxes play a significant role in the equation, even if it is most significantly an indirect role. The Center for Budget and Policy Priorities recently released a report with the purpose of “debunking” this common-sense claim. In addition to the rebuttal from ALEC’s Center for State Fiscal Reform staff, the Tax Foundation also released a series of blog posts that address a few individual issues in CBPP’s report.

First, the Tax Foundation makes the crucial point that taxes matter on the margin. Taxes might not be a person’s only reason to move but that is no evidence to assume that people do not also consider taxes when thinking of moving. Next, while the percentage of Americans moving from one state to another might appear small, at just 1.5 percent, this is well over 5 million people moving every year. Over time this “small” number adds up can be very significant. In fact, since 1960, New York has lost 14 congressional seats due to net outmigration. Additionally, from 1992 to 2010, $2 trillion of Adjusted Gross Income moved with millions of Americans from one state to another.

The third post in the Tax Foundation’s series highlights the fact that CBPP’s analysis concedes that employment opportunity is one of the primary reported reasons for moving. Since taxes have been shown to significantly affect economic growth, and economic growth in turn affects job creation and employment opportunities, taxes have a clear—if indirect—effect on migration between states. Because people move primarily for employment reasons, it makes sense that the people moving have a better opportunity where they are moving to rather than from (otherwise they would not move). This point illustrates the kinds of people that are most likely to move, namely, those that have the opportunity to earn more income elsewhere. With these points in mind, it should be no surprise that most interstate migrants are low to middle income people who see a better opportunity in another state. 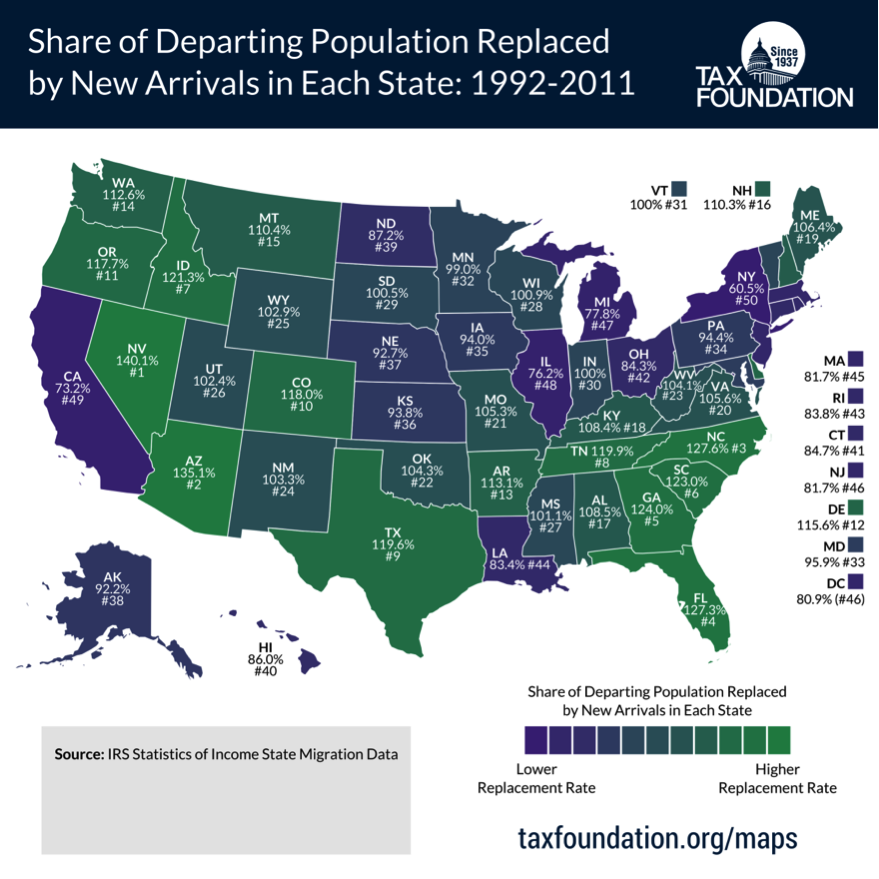 Despite claims to the contrary, the economic evidence clearly demonstrates that tax and fiscal policy have a significant impact on a state’s potential for economic growth and the amount of net in-migration that a state can expect to see in the future.