As newly elected state legislators across the country consider what issues to address, they are likely to encounter the growing storm cloud of unfunded pension liabilities. According to Promises Made, Promises Broken 2014, a new report from the non-partisan government watchdog group State Budget Solutions, unfunded public pension liabilities in the states now total $4.7 trillion.

For years many state governments have been over-promising pension benefits and using accounting gimmicks to hide the true cost of a state pension funds’ actual unfunded liability. Many state governments still utilize a defined-benefit pension system, where retired state employees are paid out a specific amount per year in perpetuity, regardless of actual market returns. This is unlike the vast majority of private sector employees who have a 401(k) style, defined-contribution plan, in which employees and employers contribute a fixed amount to an employee’s retirement account.

Promises Made, Promises Broken 2014 also dives deep into state data to calculate which states are doing better than others in terms of funding pensions. Wisconsin has the best funded public pension fund with a 67 percent funded ratio. The worst funded state pension system is Illinois, which is only 22 percent funded. The tables below show the top ten and bottom ten for best and worst funded public pension systems. 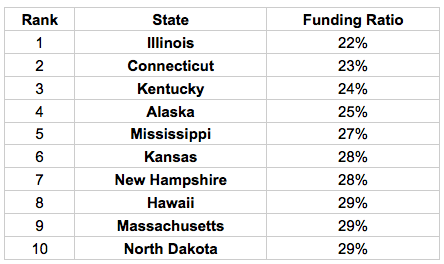 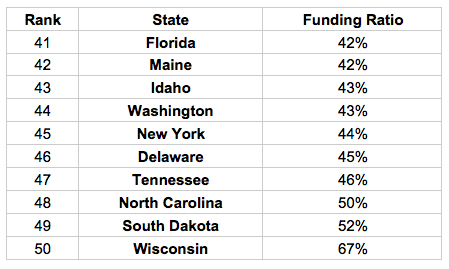 Because of these issues lurking in state pension funds, lawmakers both new and returning will need to address these structural problems or face a fiscal crisis. The ALEC Center for State Fiscal Reform recently published a report outlining how states can transition away from high risk defined-benefit pension plans into more stable defined-contribution, 401(k) style pension plans. Keeping the Promise: State Solutions for Government Pension Reform outlines the problems with state pensions and several ways that lawmakers can address these issues. Doing nothing is no longer an option, with the total unfunded pension liability growing to $4.7 trillion from $4.1 trillion last year. Unfunded pension liabilities are not political or partisan problems, but math problems.