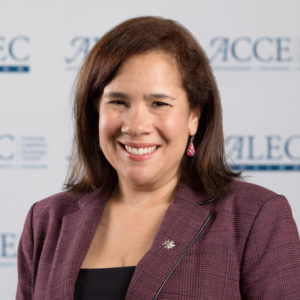 Karla Jones is the Senior Director of the ALEC Task Force on International Relations as well as the Task Force on Federalism – two very different policy areas that work well together because they are fueled by ideas that attract members interested in looking beyond strictly state-based policy. Under Karla’s leadership, the Task Force on Federalism has spearheaded work in the states on a wide array of state sovereignty issues, including the transfer of select federal lands to state control and petitioning for an Amendments Convention under the U.S. Constitution’s Article V provision. Karla has written extensively on both; however, her love of the outdoors and the American West has allowed her to witness firsthand the federal government’s mismanagement of the lands under its purview.

Karla has expanded the ALEC approach to international issues from being primarily EU-focused to one that is global – reaching out to policymakers in Africa, the Americas, the Asia-Pacific and Europe to identify issues where the ALEC governing principles of free markets and limited government intersect with international policy.  She has established partnerships with lawmakers and other officials and organizations both domestic and overseas in order to highlight the important role that free markets and limited government play in promoting international trade and the protection of intellectual property rights. Karla also works to expand dialogue and educate ALEC members on these pivotal issues recognizing that the states are the ultimate stakeholders on these and many other policy areas that are debated at the federal and international level.

With a lifelong interest in international affairs and politics, Karla was the Europe Project Director at the Jewish Institute for National Security Affairs before joining ALEC. There she raised the organization’s visibility as an opinion leader through extensive contacts with lawmakers and officials representing the EU and individual European nations, Israel and NATO and worked to underscore the importance of a healthy transatlantic alliance to achieving American national security objectives. Karla also emphasized the role that the Israel-European and Israel-NATO partnerships play in international security.

Karla has published op-eds in The Wall Street Journal and RedState and has authored articles that have appeared on the ALEC and JINSA websites and in the periodical Inside ALEC, and she has been quoted in the U.S., Argentine and Australian press. Among Karla’s pursuits outside of ALEC are travel – both domestic and international – and exploring the American West by RV and on foot.

A US-Taiwan Bilateral Trade Agreement Is a State Priority