Walking into a coffee shop in California isn’t quite like walking into a coffee shop in other parts of the United States. The general atmosphere may be much the same: the smell of roasting coffee, the quiet tapping of keyboards, and the whirring of milk frothers behind the bar – but in California, the sleepy itinerant seeking their morning cup of joe is greeted by a sign that says: “WARNING: Chemicals known to the State of California to cause cancer, or birth defects or other reproductive harm may be present in foods or beverages sold or served here.”  The drowsy morning traveler has California’s Proposition 65 to thank for this cheerful greeting. This burdensome statute has created a litigious environment in which businesses must be always on their guard for the slightest Proposition 65 infraction and has already shifted hundreds of millions of dollars to litigants.

Proposition 65, more laboriously known as the “Safe Drinking Water and Toxic Enforcement Act of 1986,” is the product of a 1986 ballot initiative designed to protect California’s drinking water from chemicals known to cause cancer, birth defects, or other kinds of reproductive harm.  Rather than ban these chemicals outright, the law mandates that businesses with more than 10 employees provide warnings, like the one in the coffee shop, to notify clients they might be exposed to certain carcinogens. Facially, the law seems like a reasonable measure to protect Californians from long-term harm. However, in practice, the law has served primarily as a way to line the pockets of enterprising “citizen enforcers” at the expense of California businesses and consumers.

By placing an exorbitant number of common substances on the disclosure list, the law exaggerates the risk to Californians and crowds out substances that pose a real risk. Over 900 chemicals are “known to the State of California to cause cancer, birth defects, or other reproductive harm.” Some of these chemicals make sense: arsenic, for example, or lead. Other chemicals on the list are less logical, such as acrylamide. Acrylamide is a chemical byproduct of high-temperature cooking found in common foods like French fries, breads, some potato chips, and most notably – coffee. A lawsuit brought against coffee chains such as Starbucks and Peets was resolved in March with the ruling that a failure to disclose the possible cancer-causing side effects of coffee violated Proposition 65. This comes in spite of the fact that in 2016 the International Agency for Research on Cancer concluded coffee could not be classified as a human carcinogen. By promoting fear over chemicals found to be largely benign in humans, California potentially endangers both businesses and individuals who may be conditioned to ignore state warnings, even where legitimate risks exist.

Compounding the problems with Proposition 65 is the statute’s so-called “bounty hunter” provision, which has created a culture of litigiousness and a cottage industry of Proposition 65 lawyers and plaintiffs that plague businesses operating in California. Under normal circumstances, in order to bring a civil suit, the plaintiff must demonstrate they were injured by the defendant. Typically, only the California Attorney General is allowed to bring “enforcement suits” that do not require injury to proceed. Under Proposition 65, any Californian can bring such a suit and recoup attorneys’ fees. The California 4th District Court of Appeals described the bringing of Proposition 65 litigation as “absurdly easy.” Even worse, the bounty hunter plaintiff can petition to have the normal civil penalty paid to them as the enforcer rather than paid to the state. Moreover, it’s easy for these bounty hunters to win. In one case, a business argued that over the 150 years of safe use of a product there was no scientific evidence of harm. The appellate court granted this, but found that businesses must prove that any exposure is 1000 times below the level of no observable effect. The burden born by businesses is immense, and the cost is obvious. Between 2000 and 2010, the California legislature attempted to curb predatory Proposition 65 suits by imposing settlement disclosure requirements and the filing of certificates of merit, which gave the Attorney General “the authority to demand the underlying information behind the certificate in order to investigate the merit of the action.” These measures have not been successful, as the statistics published by the California attorney general demonstrate.

Between 2000 (when the settlement disclosure requirements first went into effect) and June 2018, the settlement cost of Proposition 65 suits in California has been enormous. When adjusted for inflation per the Bureau of Labor and Statistics, total private and public Proposition 65 settlements came to over $383 million in 2018 dollars. Of those payments, attorneys’ fees made up a whopping 67%, or roughly $262 million in 2018 dollars. And these costs are only getting higher. Even when adjusted for inflation, the approximate average cost has risen by around $10-$15 million per year between 2000 and 2017. 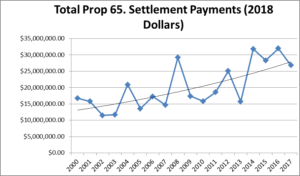 Much of this cost increase is being driven by enterprising plaintiffs’ attorneys and environmental rights groups, some of which are just shell organizations operated by law firms. The top five private plaintiffs, all either law firms or environmental groups, accounted for around 71% of total Proposition 65 lawsuits filed from 2000-2018. The avowed environmentalist groups took advantage of the “payment-in-lieu-of-penalty” option, which diverted resources to them to continue their litigation efforts. In certain cases, these groups and their attorneys personally pocketed every dime of a settlement, sometimes totaling in the millions.

Unfortunately, while the nature of California’s ballot initiative system means that at least for the time being it will prove nearly impossible to get rid of Proposition 65, it can still be taken as a warning for other states. Limited government practices and tort reform promote prosperous economies and discourage excessive litigation; Proposition 65 demonstrates some of the disastrous consequences when those policies are not implemented. The American Legislative Exchange Council has resources for state legislators who wish to enact legislation that, unlike Proposition 65, discourages excessive litigation and burdensome regulatory overreach.