A new study from the National Bureau of Economic Research (NBER) about state taxes found an interesting correlation that supports states using tax policy to compete with rivals for top talent.

In the study, titled “The Effect of State Taxes on the Geographical Location of Top Earners: Evidence from Star Scientists,” authors Enrico Moretti of UC-Berkley and Daniel Wilson of the Federal Reserve Bank of San Francisco aimed to “quantify how sensitive is migration by star scientists to changes in personal and business tax differentials across states.”  Their research confirms the Rich States, Poor States: ALEC-Laffer State Economic Competitiveness Index finding that individuals and businesses consider the tax environment of their current state and other states when debating relocation, particularly on the margin. 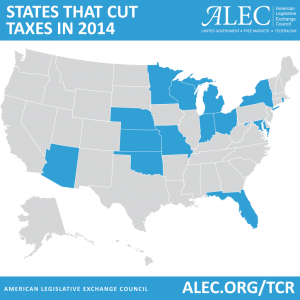 To reach their findings, Moretti and Wilson compared location and relocation decisions of top scientists, who are highly skilled and well compensated workers, to changes in personal income taxes, corporate income tax, and the investment tax credit.  The study concluded that “state taxes have significant effect [on] the geographical location of star scientists and possibly other highly skilled workers.”

The research detailed how states are competing for firms and high-skilled workers using low taxes.  States advertise low taxes with slogans like, “Texas rewards success with no state income tax” and “escape to Wisconsin,” targeting business and research centers with high tax rates like Silicon Valley and New York City.

The authors focused on top scientists because they bring immense value creation to the communities in which they reside. By being well-educated, highly productive and highly compensated workers, they are often viewed as a leading indicator for local job growth potential.

State lawmakers can learn from this study that simplifying their tax code and lowering their tax rates will create a more competitive economic environment that is conducive to economic growth.