On Tuesday, the American Legislative Exchange Council (ALEC) Center for State Fiscal Reform released the ninth edition of the Rich States, Poor States ALEC-Laffer State Economic Competitiveness Index rankings. The study ranks all 50 states based on their economic outlook, calculated by weighing 15 variables in critical economic policy areas. Therefore, it is no surprise that of the states in the top 10 for economic outlook, six (Wisconsin, Florida, Indiana, Arizona, North Dakota and North Carolina) also qualified for the most recent State Tax Cut Roundup as states that substantially reduced taxes

The ninth edition of Rich States, Poor States provides a good example of how various types of reforms can make a state’s economic climate more competitive, and therefore more attractive to individuals and businesses. Because the state’s right-to-work law was effective for the first time in a Rich States, Poor States index, Wisconsin earned an all-time best ranking of nine, its first time in the top 10. The law’s life expectancy is now in doubt, though, following a recent court ruling against it. The fate of workers who oppose forced unionization and the state’s economic competitiveness hang in the balance. Thankfully, many believe the ruling will likely be overturned. Tennessee improved the most of any state this year, moving from 17 to seven, by virtue of fully eliminating its inheritance tax. Florida is among the biggest winners in Rich States, Poor States, not only because of its top 10 ranking, but also because, after Texas, no state has seen more Americans move in from other states in the past decade. By virtue of reducing its Communication Services Tax, saving taxpayers $266 million in the process and reducing the overall burden on businesses in the state, Florida will cement its position among the best states in the nation for economic outlook.

Utah, which has been the top-ranked state for all nine editions of Rich States, Poor States, combines all of the positive narratives seen in Tennessee, Florida and Wisconsin. Thanks to competitive and flat income tax rates, not levying a death tax, and being right-to-work, Utah is consistently competitive. However, recently legislated tax increases could eventually threaten that ranking, especially with states like North Carolina enacting strong pro-growth policies. North Carolina passed over North Dakota to claim the number two outlook ranking by recently passing some of the most significant tax reform of any state in decades. The reforms included implementing a flat rate to the personal income tax, lowering the rates overall and repealing its death tax.

While all taxes are economically damaging, some are more damaging than others. Taxes on work, like the personal income tax, create barriers to production and punish individuals for their hard work. Among the 15 factors that contribute to a state’s economic outlook rank, a low income tax burden, or avoidance of the tax altogether, is arguably the most essential to a state’s economic growth. Comparing the nine states without a tax on personal wage income to the nine states with the highest marginal rates of the tax results in the following revelation: the nine states that levy no income tax have significantly higher average rates of population growth, employment, income, production and revenue as compared to the nine states with the highest personal income taxes. 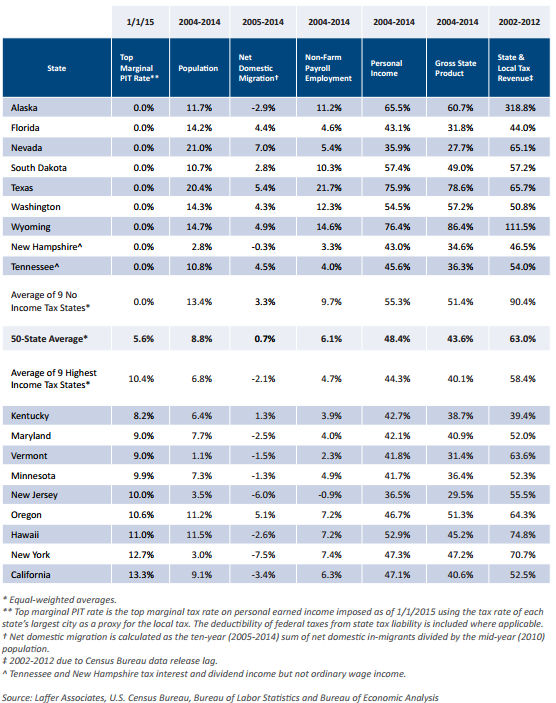 Another lesson gleaned from Rich States, Poor States is that if a state is not actively trying to improve its economy with pro-growth reforms, there is a chance that it will be left behind, as seen in the case of North Carolina jumping North Dakota, Oklahoma passing Texas and New Hampshire besting Massachusetts. North Dakota enacted considerable reforms, including about $400 million in tax relief, and its third-place ranking is hardly an indictment of the state’s economic outlook. Another typically high-outlook state, Indiana, did nothing wrong per se, but fell from a ranking of three to six due to significant pro-growth reforms enacted by states like North Carolina.

As shown through the 2016 edition of Rich States, Poor States, pro-growth fiscal policies expand economic opportunity. Individuals, whether acting on their own behalf or while making decisions for their business, can be trusted to react to their state’s economic climate. State policies that impact competitiveness can either help, or hinder, economic development. In order to create the most widespread opportunity, Poor States should take heed of the work done by their Rich State counterparts. Healthy competition between the states is the best way to guarantee the best outcomes for hardworking taxpayers.