Taxpayers demand spending limitations, budget reserve prudence, and property tax relief. Proposals such as this could end the vicious cycle of spend and tax, tax and spend.

Two pieces of legislation working their way through the South Dakota legislature could provide spending restraint along with property tax relief for residents. The first is SJR 5, which is a joint resolution that enables voters to enact a constitutional amendment placing a cap on state government spending increases. The second is SB 150, a bill that allows for tax revenue generated in excess of the spending cap to be used jointly for budget stability and property tax relief. South Dakota’s Rich States, Poor States: ALEC-Laffer State Economic Competitiveness Index ranking has steadily declined from 2nd place in 2012 to 12th in 2017 as general fund spending spiked, taxpayers endured two historically large tax increases in 2015 and 2016 and property taxes steadily grew at almost four percent annually over the past decade.  These two proposals operating together will prevent future budget crises while also lightening the tax burden.

The proposed constitutional amendment limits the annual increase in general fund appropriations to the smallest of the following three growth rates: population growth plus inflation, personal income growth, or state GDP growth. Over time, such a limitation has a dramatic impact on spending. Consider that from 1990 through FY 2018, general fund appropriations grew an average of 5.5 percent per year. If appropriations had increased only by the proposed annual maximum, the growth would have been 3.1 percent on average.

This may not sound like much, but the cumulative results are stunning. Appropriations soared more than 400 percent— from $401 million to $1.6 billion—during those years.  If these limits had been in place for even the last 10 years, it would have meant more than $200 million savings for the state of South Dakota this year.

In anticipation of a budget surplus “problem” thanks to economic growth exceeding spending growth, the companion bill mandates that these surpluses be used for property tax relief. While at the same time stockpiling a portion of the funds as a safeguard against possible economic slowdowns.

Here are the details governing the use of excess revenue. The following four “buckets” for excess funds are set up: bucket one is for a budget reserve fund to be used only in emergencies, bucket two is for property tax relief, bucket three is for the Building South Dakota Fund and bucket four is for a revenue replacement fund. The “buckets” vary by size and each preceding bucket must be filled before any funds flow to the next one. Before any money for property tax relief or the Building South Dakota fund is provided, the budget reserve must equal 10 percent of the general appropriations from the prior year. The property tax relief bucket will then be funded to five percent of the general appropriations from the prior year.

Each year, half of these property relief funds will be transferred to counties to lower property taxes.  The Building South Dakota Fund will be funded to one percent and the revenue replacement fund will collect the remainder of excess revenue up to 15 percent of prior year appropriations. In economic downturns, the availability of these revenue replacement funds will permit state government operations to proceed without turning to tax hikes or budget cuts. Only twice in the past 20 years has South Dakota state government tax collections dropped year over year by 0.1 percent in the 2002 recession and by 1.5 percent in 2010 in the midst of the Great Recession. 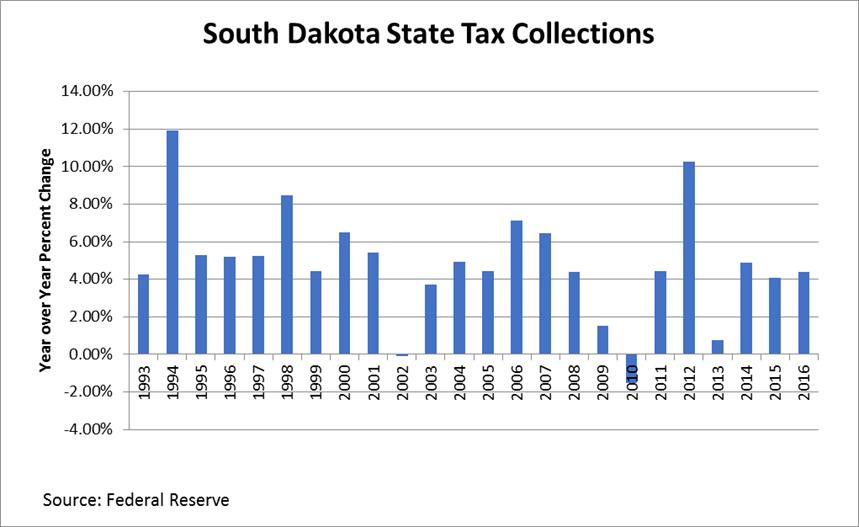 Taxpayers demand spending limitations, budget reserve prudence, and property tax relief. Proposals such as this could end the vicious cycle of spend and tax, tax and spend.

Taffy Howard represents the 33rd district in the South Dakota House of Representatives. Joel Griffith is the director of the Center for State Fiscal Reform at the American Legislative Exchange Council.