Taxpayers in Every State Bearing Costs of Medicaid Expansion

Was Medicaid expansion a fiscally prudent decision for state governments? As with most sweeping changes, it depends on whom you ask. Medicaid expansion, a part of the Affordable Care Act (ACA), expands eligibility to all individuals earning less than 138 percent of the federal poverty level. Medicaid was initially, intended as a safety net for those unable to work, children from low-income households, disabled, pregnant women and senior citizens. Expanding eligibility beyond these narrow classes of individuals to include even young adults capable of earning a living burdens budgets already strained by a decade of weak economic growth.

In order to entice states to adopt this costly expansion, the Affordable Care Act stipulated that the federal government would cover 100 percent of the cost for the first three years of Medicaid expansion, tapering down to 90 percent by 2020 and onward. Initially, the federal government threatened to withhold all Medicaid funding for any state refusing to accept the expansion offer. However, the Supreme Court ruled this paired threat to be unconstitutionally coercive. The carrot without the proverbial stick proved sufficient to entice 32 states to adopt the expansion. 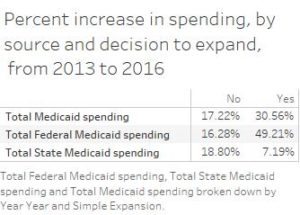 Medicaid expansion failed to account for the human element of public policy—how people and systems are motivated and prodded by incentives. Between 2013 and 2016, total Medicaid spending (state and federal dollars) grew nearly twice as fast in states which expanded eligibility relative to those which did not. This growth was not due to increased spending on the state’s side of the ledger but rather to unexpectedly high costs per expansion enrollee. The Department of Health and Human Services (HHS) expected that pent-up demand and adverse selection would produce a temporary cost spike in 2014 that would decline in 2015. Instead, the costs grew nearly 50 percent in 2015. 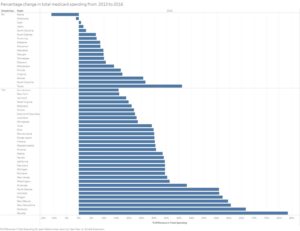 Why? As the late great Nobel laureate Milton Friedman put it, “Nobody spends somebody else’s money as wisely as he spends his own.” When states share a greater portion of the burden with the federal government, as they do with non-expansion Medicaid enrollees, they monitor insurers closely to reduce costs, which in turn causes insurers to be more judicious in what procedures they cover. Placing 90 percent of the expansion costs on the federal government greatly diminishes the incentive for state administrators, healthcare providers, and insurers to prevent Medicaid fraud and abuse.

In many instances, inefficiencies result in expansion enrollees receiving half of the funds related to the expansion. In one study of the Oregon Medicaid expansion, enrollees only received between 20 and 40 cents worth of benefits for each dollar spent. Throwing vast sums of federal dollars may have had some positive impacts, such as reducing medical debt in expansion states. But expansion has also created some unexpected, negative impacts, such as fueling the opioid crisis. The benefits for expansion states have come at the immense cost which are, Despite the rosy initial projections, the costs for benefits in expansion states are rising steeply and are likely to climb in the years to come.

Supporters of Medicaid expansion refused to consider or possibly simply ignored human nature; taxpayers will bear the brunt of this mistake. The cost of paying states to expand Medicaid will translate into enlarged federal deficits. The spending and debt will suppress economic growth and eventually require a heavier federal tax burden.  All states- including those which have not expanded their Medicaid programs—will suffer from this short-sighted strategy.

Policy makers should seek to improve medical care and access for low-income individuals. But Medicaid expansion is ill-equipped to accomplish these goals. In truth, there is no one-size fits all solution for our economically and socially diverse union of states. An effective reform would empower states and municipalities to design unique solutions to their unique challenges, to experiment, to share their findings, and to invest in those ideas which work best for them.